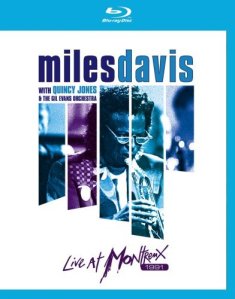 Eagle Rock Entertainment proved throughout 2012 why it is one of the leaders in live recordings.  There was not one bad recording from this company throughout the year.  Now with the start of a new year, Eagle Rock has picked right back up where it left off.  It started the year in big fashion with the release of Deep Purple Live in Paris 1975.  Now only a couple months later, Eagle Rock has released yet another top notch release in the form of Miles Davis Live at Montreux 1991.

Miles Davis’ performance at Montreux in 1991 was not the first visit that the legendary trumpet player had made to the equally legendary music festival.  It would though, be his last.  Only months after this performance, Davis sadly passed away.  Two years ago, Davis’ complete performances were culled for a complete box set also released by Eagle Rock Entertainment.  While two years may not seem like that much time, it actually is.  It is very easy for just such a box set to go out of print in that time.  As a result of that possibility, audiences now get to re-live one of the most iconic of Davis’ performances at Montreux on DVD and Blu-ray.  Considering that this concert has already been released as part of a larger box set, one is left to question what makes this single disc performance worth one’s time.  The answer is simple.  Over two decades have passed since this concert was originally recorded.  The footage recorded for that show has stood the test of time quite well.  Both the video and audio are outstanding.  And the set list chosen for the performance is just as impressive.  Together, all three make this a performance that any Miles Davis aficionado will enjoy.

This final performance by Miles Davis at the Montreux Jazz Festival featured not just Miles but also the Gil Evans Orchestra and another legend in his own right, Quincy Jones.  The control that the entire group has throughout each song really comes through so expertly thanks to the audio mixing done to give new birth to this performance.  And even at twenty-plus years old, the footage looks extraordinary, as if it hadn’t aged a day.  That is a tribute to those who worked so painstakingly to transfer the video from VHS to DVD and now Blu-ray.  While it may not have been entirely intended, one of the most interesting moments in this performance, speaking of footage, comes as Davis and company perform ‘Blues for Pablo.’  The way that the light trails off of Davis’ trumpet as he plays makes for such an incredible experience.  It makes the trumpet look almost as if it’s smoking.  And as slow as this song is, it simply makes for an incredible added element to the song.  Given, the way the light reflects and moves with Davis and his instrument was not an intended effect.  That was just the effect of the video recording equipment at the time.  But the mood of the song makes it such a fitting effect.  It adds a whole extra level to the song that can’t really be put into words.  Of course, it is just one of so many great numbers in this set.  Audiences that know Davis’ body of work will also enjoy the equally smooth ‘Summertime.’

‘Summertime’ is more up-tempo in this performance.  But it still doesn’t lose its originally bluesy feel.  Again this exemplifies the talent and professionalism of Davis, Jones, and the Gil Evans Orchestra.  It still stands out as another of the performance’s best numbers.  And it’s but one of so many that audiences will enjoy.

As if the numbers in this set list aren’t enough for viewers, audiences are also treated to an extra bonus as the now late founder of the Montreux Jazz Festival, Claude Nobs, and others get their chance to share their memories of Miles and his influence on themselves and the music world as a whole.  Audiences will laugh at Nobs’ story of how he and Davis first met and what some of Davis’ first words to Nobs were.  Also sharing in the memories are Stanley Clarke, Jean Luc Ponty, and Al Di Meola.  For those who might not know, this trio of gentlemen played a big role through the years in bringing Miles Davis’ works to the masses, re-mastering them for the numerous albums that have been re-issued to CD.  Their stories are, much like those of Nobs, both entertaining and very deep in so many ways.  And they, like the other individuals interviewed for this feature, offer so much incredible insight into who Miles Davis was, and his importance to the world of music as a whole.   They are truly a bonus and a worthwhile one to what is just one more piece to this history of one of the music industry’s most important figures.  They work with the main performance feature to make this release one that any Miles Davis aficionado will want to add to their own home library.  Miles Davis Live at Montreux 1991 is available now in stores and online.  It can be ordered online via the Eagle Rock Entertainment website at http://www.eagle-rock.com.