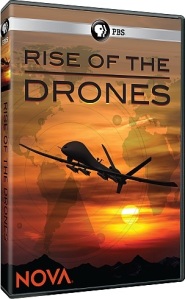 PBS’ Rise of the Drones is a fitting documentary for anyone that has any interest in military warfare and the technology associated therewith.  It is an aptly titled piece, as it follows the course of events that has led to the increasing presence and use of drones both in the military world and that of “international affairs.”  It does this by explaining the history of spy planes; from the famed U2 to the equally famed SR-71 Blackbird, audiences see first-hand how the military and specific government agencies have used specific technologies with the times, all the way to the current era.  Before anyone begins to think that any agenda might be being pushed here, viewers can be assured that there is no bias in this near hour long documentary.  The roughly fifty-two minute program (not counting end credits) presents both the good and the bad of the increasing presence of drones around the world.  Military buffs and historians will also appreciate the use of actual footage of the SR-71 Blackbird and the U2 to illustrate where military technology was and the direction in which it may well be headed increasingly in the very near future.

For all of the good that drones have proven to our nation’s armed forces and government agencies, they are not without their faults.  And as viewers will see in this unbiased feature, the concerns with drones are not many per se.  But they do give reason to be concerned.  One of the main concerns raised in the program is that of personal privacy.  The concern is raised that as easy as it would be to biud even a small drone in one’s own garage, how long would it be before ordinary citizens are using drones to invade one another’s privacy, the potential military misuse aside.  Also noted as a concern is the fact that drones are robotic.  Yes, they serve a certain amount of good.  But as is the case with any machine, they are machines first and foremost.  So where a live pilot could take evasive maneuvers if need be, a drone is handled by an operator that could be half a world away.  This could lead to reduced reaction time and thus the potential shooting down of a drone.  This is exemplified in the recent ordeal that the military had when a U.S. drone somehow fell into Iranian hands.  One side said the drone was shot down.  The other disputes that, stating that an internal error within the drone caused it to go down.  In short, whereas drones may be expendable, the use of them comes with just as much risk as the use of a real pilot in dangerous situations.  And drones, as noted, are not always accurate.  Viewers will see stories taken straight from the headlines in which drone strikes on innocent civilians have led to international incidents.  Even with the most advanced technology, this is still an issue.

The concerns raised over the use of drones that are noted here are fully justified.  And while they are justified, those in favor of using drones have just as much of an argument.  Those arguments are also pointed out, again showing the programs total lack of bias.  Those in favor point out the comparison of training time for drone pilots versus that of pilots who actually sit in the cockpit of a fighter jet.  The time to train for “piloting” a drone is far less than that of an actual pilot.  Also indirectly noted as a positive, is the amount of time which drones can spend in the air.  Whereas fighter jets have to refuel after a given amount of time, certain drones can actually stay aloft as long as thirty-five hours without coming down or re-fueling.  There is also the impact on the human cost.  An increase of drones being used means less chance of pilots and soldiers being killed both on the ground and in the air.  Keeping this in mind and comparing it to the positives discussed in the program, it’s easy to see this is a discussion that is certain to go on for the foreseeable future.  It’s sure to create discussion among both casual military enthusiasts, among politicians, and those familiar with drones.  The political points raised on both sides make it an equally interesting addition to any college level political science course, too.

As one can already see from the pros and cons of drones listed in Rise of the Drones, drones are a good tool that can be effectively used in order to protect America from its enemies.  But it no drone is perfect.  It is not an ends, but more a means to an end perhaps.  If the discussions raised on both sides aren’t enough to interest viewers, then the animations and actual footage of the SR-71 Blackbird and the U2 will add to the program’s interest level.  Together with the discussions raised, this footage makes Rise of the Drones a program that any military and political enthusiast will want to watch at least once.