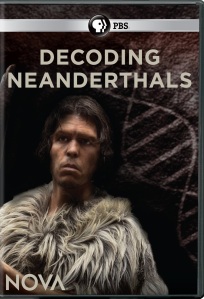 Decoding Neanderthals is a welcome companion piece to the recent release of What Makes Us Human? from PBS’ NOVA ScienceNow.  This recent episode of NOVA was released to DVD in late March.  It expands greatly on the concepts raised through the previously mentioned program.  It keeps the concepts discussed simple enough for casual viewers to understand, too.  It does this through interviews with scientists and academics as well as filmed segments used to help illustrate the concepts discussed.  Among the concepts discussed in this program are: what is believed to have actually happened to Neanderthals, how Neanderthals survived the ice age, and the effect of Neanderthals’ fate on modern humans.  Decoding Neanderthals isn’t What Makes Us Human? But considering that it expands so well on the aforementioned program, it is a program that any student of the anthropological sciences will appreciate, as will even the most casual viewer.

Decoding Neanderthals picks up pretty much right where What Makes Us Human? left off.  The latter of the two programs discussed how physical and natural factors set us apart from Neanderthals.  The connecting thread though, is that of genetics.  Where What Makes Us Human? offers a casual glimpse at the genetic connection between modern humans and Neanderthals, Decoding Neanderthals goes into more depth, explaining that genetics has proven that perhaps humans didn’t wipe out Neanderthals, but actually interbred with them, thus leading to the eventual assimilation of Neanderthals into the much larger population of humans that originally came from Africa.  It’s just one concept on which this program expands from the prior program.  Of course, the genetic sciences are just the tip of the iceberg that makes this episode of NOVA so interesting.  Students of the social sciences will appreciate this program in its discussions of Neanderthals’ use of makeup and even social behavior such as burying their dead.

Scientists and academics interviewed for this program reveal in their discussions that Neanderthals actually used makeup and other items of personal decoration.  Even more interesting to note is the theory that just as sports fans use face and body paint at events, so did Neanderthals use face and body paint to determine who was friend and who was foe.  This could perhaps serve as more proof of the genetic interbreeding of Neanderthals and humans as such a behavior would have been passed down through that interbreeding.  The same can be said of the discovery of what is believed to be a burial site for Neanderthals.  That they would take part in such a social behavior as we do serves as even more solid proof that said theory of interbreeding has even more ground on which to stand.  And along with the expanded discussions on the tools used by Neanderthals, viewers get in this episode of NOVA, a program that answers a lot of questions about mankind’s past.  It’s a piece that crosses scientific lines, resulting in a product that makes for a wonderful addition to any college level biology and anthropology course as well as the home library of anyone that has even the most fleeting of interest in this subject.  It’s available now on DVD and can be ordered online at PBS’ online store at http://www.shoppbs.org.