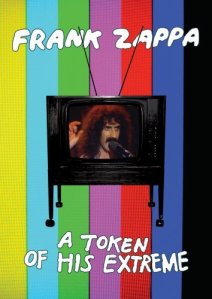 Frank Zappa was a musician all his own.  He did more than walk to the beat of his own drummer.  He was his own drummer.  One listen through any of his records proves that.  And now Eagle Rock Entertainment is proving it even more thanks to the release of a classic Zappa live show in Frank Zappa: A Token of his Extreme.  This classic television special was originally recorded in 1974.  It was personally produced and edited by Zappa himself.  And it shows, too.  Much like Zappa himself, the imagery, performance, and editing throughout the performance is unlike that of any other live recording.  The bonus interview from the Mike Douglas Show adds even more interest and insight to the performance.  Specifically, Zappa himself dispels what many first time listeners might think in experiencing this concert.  All together, they come together to make yet another standout live recording distributed by Eagle Rock Entertainment.

The performance put on by Frank Zappa and his band mates—George Duke (keyboards, finger cymbals, tambourine), Napoleon Murphy Brock (sax, vocals), Ruth Underwood (percussion), Tom Fowler (bass), and Chester Thompson (drums)—is one unlike any concert today.  It’s unlike any concert put on even during that time.  This stands both musically and visually.  The music presented by Zappa and his band mates in this concert mixes Zappa’s different musical styles to make a performance that will entertain anyone whose mind is open enough and whose attention span in long enough.  Perhaps the only problematic issue with the entire concert is the editing.  The fast paced cuts that are peppered throughout the concert footage can potentially lead to epileptic seizures.  That is because they are so thrown in so often and because they are so fast in their cuts back and forth from camera to camera.  In Zappa’s defense, as problematic as this editing is, it is understandable why he would make the cuts when taken into full context of the music.  It showed that he had a full understanding of the full impact that camera work can have on a performance.  Even more in his defense, this might have been one of his earliest attempts at editing.  If it was, then it is definitely forgivable.

The editing and performance in this new release from Eagle Rock Entertainment go hand in hand.  Zappa and company were clearly fully immersed in their music.  They get so much into the performance that at times, it looks like Zappa himself has completely zoned out and is on another plain, musically speaking.  For lack of better wording, it looked like he was under the influences of certain substances.  Though, if the bonus interview with media personality Mike Douglas tells anything, the only thing influencing him was the music.  Zappa claimed in his interview with Douglas that he in fact did not do drugs.  Though, he did know plenty of people that had fallen under the influence of certain substances.  The way in which he notes this is peculiar for lack of better wording.  It sounds like there’s a slight seriousness in his tone when he admits this to Douglas.  It puts the entire performance into an entirely different light than had one watched the concert without this extra knowledge.  It makes this concert one that any Zappa purist will want to see whether for the first time or the first time all over again.  It is available now in stores and online.  It can be ordered online direct from the Eagle Rock Entertainment website at http://www.eagle-rock.com.