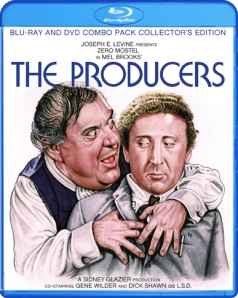 In 1968, director/comedian Mel Brooks debuted a movie that would go on decades later to be one of the greatest comedies ever put to screen.  That comedy was the Gene Wilder/Zero Mostel led farce of the theater industry, The Producers.

The Producers was Mel Brooks’ big screen directorial debut.  And boy was it ever a debut?  It’s proof that in an industry that has become so overloaded with overly gritty and violent crime dramas, crime can be funny.  For that matter, it even makes criminals funny and–to a point–endearing.  It is outrageously irreverent and politically incorrect even by today’s standards.  It is so irreverent and outrageous that even those that are now old enough to take it in will find themselves laughing tears of joy from beginning to end. It serves as an example of everything that was once right with the movie industry and everything that the movie industry has lost since its premiere so many decades ago.  So what makes it such a great movie?  Let’s start with its writing.

The writing of The Producers is uproariously hilarious.  There is not one moment in this debut from Mel Brooks that won’t have audiences laughing uproariously even today.  The Nazis would go on to be the butt of many of Mel Brooks’ jokes in his movies, justifiably.  So being that this movie would be the first time audiences got a taste of his humor, it makes his jokes that much funnier.  His jokes about the Nazis were only part of what made Brooks’ writing in this movie so hilarious.  At its most basic of levels, this movie was a buddy comedy that doubled as a farce of how the theater industry works.  Go figure, he would go on decades later to remake this movie both for the stage and then later would be adapted to the big screen and then small screen.  The jokes centered on the auditions and the very discussions between Leo and Max on which play to use for their scheme will leave people holding their sides as they laugh.  And looking at how people audition for reality shows today such as American Idol, America’s Got Talent, and others, it’s incredible just how much truth there was to the audition scenes in this movie.  It’s that truth factor that makes these jokes that much funnier and in turn, the overall movie that much funnier.  It proves that there would be no Seth McFarlane or anyone else of that ilk without Mel Brooks.

Brooks’ writing in The Producers is one part of the whole that makes this movie one of the best comedies of all time.  The jokes and gags are wonderful.  They are no less entertaining with each watch.  Viewers should also take into account Brooks’ ability within the script to balance its dual story lines.  On one side, The Producers is a buddy comedy.  On another, it’s a farce of how the theater business works.  Somehow some way, Brooks was able to take both of these and marry them seamlessly together.  The choice of Gene Wilder and Zero Mostel for the central roles was perfect.  Their chemistry made for one of the greatest comedic duos of all time.  The scene in which Mostel’s Max takes Leo’s (Wilder) blanket is just one example of this.  His almost neurotic reaction is one of the movie’s absolutely funniest moments.  Ironically enough, viewers will learn in watching the movie’s bonus features (which were carried over from the original DVD release) that Wilder in fact was genuinely freaking out over the blanket.  What led to this is something that viewers will have to discover for themselves when they pick up the movie in its new Blu-ray/DVD combo pack release from Shout! Factory.

Staying on the matter of the new re-issue’s bonus features, the features on this latest release were carried over from the previous DVD release.  Because they have been, now a whole new generation of comedy lovers can learn the secrets of the movie’s casting and how some of its funniest moments came about such as the now infamous blanket scene between Wilder and Mostel.  Just as interesting to learn about is that if not for the hit movie The Graduate, fellow veteran actor Dustin Hoffman might have actually filled the role of Leo Bloom and not Gene Wilder.  No one will ever know what the might have been like.  But the fact of the matter is that Gene Wilder was the perfect choice to fill the role in Hoffman’s departure.  And in what is one of the most eye opening of revelations, one of the female extras used in the play segments protested wearing certain Nazi symbols anywhere on her even though the attire was meant as part of the overall joke making fun of the Nazis.  According to the interviews included, the woman in question proclaimed that she had worked far too hard to get to where she was, so she refused to wear what the movie’s heads wanted.  That’s pretty brave for someone who was just an extra.  The reveal as to what she ended up wearing is just as funny considering it was a “compromise.”  As minor as this little factoid is, it’s this and so many other interesting notes that make the movie even funnier.  And along with its solid writing and acting, and ability to balance its dual story lines, it proves yet again on its latest re-issue why it is still one of the best comedies of all time, if not the greatest.  It’s now available on Blu-ray/DVD combo pack in stores and online and can be ordered direct from the Shout! Factory store online at http://www.shoutfactory.com/?q=node/217373.  While waiting for the new Blu-ray/DVD combo pack to come in, audiences can keep up with all the latest on Shout! Factory’s other upcoming releases on its website, http://www.shoutfactory.com and its official Facbeook page, http://www.facebook.com/shoutfactoryofficial.