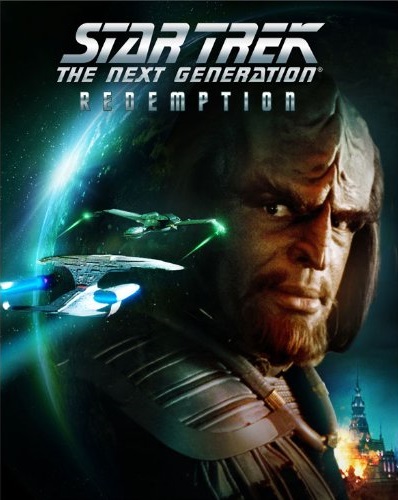 Star Trek: Redemption is a good companion piece to the newly released fourth season of Star Trek: The Next Generation.  The two-part episode that bridged the fourth and fifth seasons of is one of the strongest episodes from the still young life of the hit science fiction series.  It is such a strong episode because of its writing.  Season Three really saw Star Trek: TNG’s writing improve by leaps and bounds from its first two seasons.  This episode was a prime example of how far the show’s writing had come since the show’s inception.  It is one of a handful of episodes focuses more on character development, which was the key in getting viewers to better identify with not just the characters, but the show, too.

The most interesting aspect of this two-part bridge episode is the fact that according to the bonus commentary and bonus feature, “Survive and Succeed: An Empire at War” series creator Gene Roddenberry was completely against this storyline originally.  Ronald D. Moore and company note in the bonus episode commentary that Roddenberry’s initial thought on Worf was that Worf was not a main character.  The result was that he believed that Worf did not deserve an episode of such level.  Go figure, it’s gone on to become one of the best episodes in the series’ seven-season run.  It proves exactly why Worf did in fact deserve to be considered a main character even that early in the show’s run.  After all, the show’s writers had written other episodes for him in the previous seasons.  This was merely the culmination (also as noted in the bonus commentary) to those episodes.

That this two-parter solidified Michael Dorn’s place as a primary cast member on Star Trek: The Next Generation is only one part of what makes “Redemption” a great episode.  It also takes the time to flesh out the Klingon world, just as much as Worf’s own story.  Audiences had already been introduced in small ways in previous episodes to the Klingon way of life.  But this was really the first time that audiences were taken deeper into the Klingon culture.  It’s an eye opener that even a child could face the death penalty in the Klingon culture for certain crimes.  By connection, it’s just as powerful to see that while he is a Klingon, Worf was willing to go against that norm.  Audiences that watch this episode with commentary will appreciate how this decision came about.  Yet again, it’s proof of the value of a feature’s bonus commentary.

Audiences that watch this episode with commentary are treated to some very enlightening details that tie directly into the episode.  Some movies and TV episodes’ commentaries are not all that useful.  They are there more for entertainment’s sake than anything meaningful.  “Redemption” is the exact opposite of that, as detailed here.  In terms of the entertainment factor, audiences do find out in the commentary that some of the cups used in this episode were allegedly used in the massively major motion picture (say that three times fast), The Ten Commandments.  There is also a little tidbit revealing that the bridge of one of the Klingon ships had in fact been used in some of the original movies in the Star Trek franchise.  And even the hall in the Klingon High Council building was remodeled from the episode, “Sins of the Father.”  It’s these bonus facts and general insight from the creation of the episode that audiences will appreciate from this special stand-alone release.  It is available now on Blu-ray in stores and online at the official Star Trek website at http://shop.startrek.com/detail.php?p=452626.  Star Trek fans can keep up with all of the latest Star Trek news and more on the show’s official website, http://www.startrek.com.