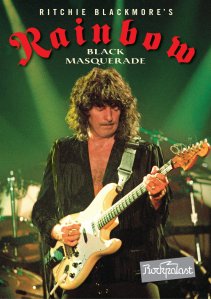 Eagle Rock Entertainment has built quite the reputation over the years as one of the leaders in live recordings.  Releases from the likes of Queen, The Rolling Stones, and even Slipknot and Stone Temple Pilots last year show why Eagle Rock has justifiably earned that reputation.  Already, Eagle Rock has maintained that reputation in 2013 with even more top notch live recordings already released and more on the way.  Among the most anticipated recordings to come are the likes of Dream Theater’s Live at Luna Park and The Rolling Stones’ Sweet Summer Sun: Hyde Park Live.  Getting back to already released live recordings, one of the most notable of Eagle Rock’s most recent live recordings released in 2013 is the newly released Ritchie Blackmore’s Rainbow: Black Masquerade.  This DVD recording was released just a couple of weeks ago.  And it’s one that was well worth the wait for any purist fan of rock and roll.

Ritchie Blackmore’s Rainbow: Black Masquerade is a great live recording from the band’s post Ronnie James Die lineup.  It was originally recorded in 1995 at Dusseldorf’s famed Rockpalast TV series.  Considering that nearly two decades have passed since this concert was originally recorded, those responsible for uncovering the footage and transferring it to DVD are to be commended.  Both the audio and video quality of the concert is impressive to say the least.  They are both just as clear as they must have been in the show’s original recording if not better than said recording.  Director Gerd F. Schultze is deserving of credit here, too.  It was under Schultze’s watch that audiences catch the band’s nonstop energy and enjoyment from start to finish of the roughly ninety-minute-plus concert.

The quality of the footage in its transfer from tape to disc plays a big part in the success of this recording’s overall success.  It’s not all that audiences will appreciate here, either.  Just as much as fans will appreciate the quality of the show’s footage in its transfer, fans will also appreciate the performance itself.  Blackmore breezes through the show, exhibiting his abilities as both a modern guitarist and even as a classical guitarist.  He proves why he was still considered one of the industry’s most respected guitarists at the time as he made his way effortlessly through each song.  That’s not to say that he isn’t still considered one of the greats today.  It just serves to show that even after so many years with Deep Purple, there was still plenty of fire left in him at the time.  Suffice it to say that it is in its own way, a tribute to him and his abilities.  He isn’t the only member of the band that gets to shine in this concert, either.  Singer Doogie White is a fitting replacement for RJD.  His vocals soar with such power from one song to another.  And his interaction with both the band and the audience in attendance helps to build the show’s overall energy.  One would be remiss to ignore the talents of keyboardist Paul Morris and Chuck Burgi here.  Morris is right up there with the likes of Jordan Rudess (Dream Theater) and so many others of that ilk in his performance.  And Burgi’s drumming is classic rock at its finest.  From his over the top outfit to his talents and showmanship, he plays his own part in bringing fans a memorable show.

The performance by the post RJD lineup of Rainbow is in itself more than enough to make buying or ordering this new DVD well worth it.  The talent of each member of the band shows true musicianship all the way around.  And the set list that spans both the Deep Purple and Rainbow catalogue adds another element of enjoyment to the show.  And then there is the quality of the footage in its transfer from tape to disc.  All of these aspects work hand-in-hand so to speak to make Ritchie Blackmore’s Rainbow: Black Masquerade one more impressive piece from Eagle Rock Entertainment.  There is one more factor to be considered in the presentation’s overall enjoyment.  It’s a factor to which most people don’t pay attention but should.  It is the included liner notes in the DVD’s bonus booklet.  Writer Jeff Katz puts it even better than this critic could have in the liner notes, that “what we see in this concert is a band firing on all cylinders.”  Katz goes into painstaking song-by-song detail in his liner notes, explaining why this recording was such an important performance to be unearthed.  In doing so, he explains to audiences that in examining this release, he had to look back at his own experiences in seeing Rainbow live in person.  Those ruminations do an excellent job of setting up his take on each song.  All together, his analysis is more than just an analysis.  It’s like a program for a rock concert.  Audiences can almost read each song’s notes as each song plays, and get a better understanding of each opus.  Together with the other mentioned factors to consider in this recording, it turns out to be the icing on the proverbial cake.  It makes the performance whole and all the more worth picking up now that it is available in stores and online.  It can be ordered from Amazon at http://www.amazon.com/gp/product/B00DPH7QFM/ref=s9_simh_gw_p74_d0_i1?pf_rd_m=ATVPDKIKX0DER&pf_rd_s=center-2&pf_rd_r=1CF1TH81AXSD69D1EDKF&pf_rd_t=101&pf_rd_p=1389517282&pf_rd_i=507846.

For more information on this and other releases from Eagle Rock Entertainment, audiences can go online to http://www.eagle-rock.com and http://www.facebook.com/EagleRockEnt.