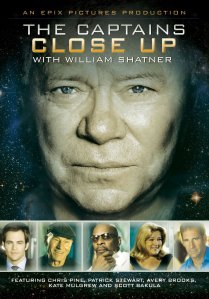 The Captains Close Up with William Shatner is an enjoyable documentary for anyone that has grown up with Gene Roddenberry’s beloved sci-fi franchise that is Star Trek.  That started as a shot in the dark decades ago has grown to become one of television’s most beloved franchises.  And the people that have helmed the most famous of all starships in sci-fi history have by connection become among the most respected, beloved, and famous figures in television’s modern history.  Fans get to see them every year at conventions around the country.  But how many fans have ever had the chance to see all of the Federation’s most well-known captains in one place at the same time?  Thanks to Entertainment One and epix, Star Trek fans can hear from those individuals in this new DVD.

Epix and EOne’s new Star Trek documentary sees the very first of the individuals to lead the Federation’s flagship interview those that came after him.  This includes Avery Brooks (Star Trek: Deep Space Nine) and Kate Mulgrew (Star Trek: Voyager).  Even Chris Pine (Star Trek, Star Trek: Into Darkness, People Like Us), makes a surprise appearance in the first of the DVD’s five segments.  Audiences will appreciate the interviews culled for this presentation as they show not just the captains, but the people behind the uniform.  One of the most intriguing factors that viewers will note ties together each of the actors is their collective theatrical background.  Each of the cast members started out in theater before making a name for themselves in each of their respective installments of Star Trek.  One cast member from one of the more recent franchises even notes in her interview that having a theatrical background coming into any of the Star Trek franchises was very important.  That is because it helps to adapt to and interpret each script and situation.

The theatrical experience tying each captain to the other is intriguing.  There is no doubt about that.  Most interesting of all though, is the interviews themselves.  Shatner comes across in an entirely unpretentious fashion as he sits down with each star.  Watching him discuss life on and off screen with each captain is more like watching two old friends catching up on old times than any formal interview.  Deciding which interview best illustrates this is difficult.  But being that he is the most well-known of the captains, the most logical choice would be Shatner’s interview with Sir Patrick Stewart.  Stewart speaks candidly with Shatner about his modest upbringing, his career before and after Star Trek, and about his charity “Refuge.”  Even Stewart’s own son gets in on the act.  He comes in, sits down with Shatner and his dad, and shares some rather entertaining tidbits of information about growing up in a family of actors.  Viewers will laugh along with Sir Patrick as his son shares these entertaining anecdotes.  Sir Patrick’s reaction is timeless.  He visibly blushes, hides his face and laughs embarrassed at the stories.  On the completely opposite end, Sir Patrick’s own emotional story of growing up with an abusive, alcoholic father is just as moving.  It is moving not because he admits his father only beat his mother, but because it led him to create “Refuge” in an attempt to help women who have been victims of domestic violence.  It’s easy to see how difficult it was to discuss this story.  And it makes him that much more human.

After his interview with Stewart, the next best example of the interviews’ candid nature would have to be Shatner’s interview with Kate Mulgrew (Star Trek: Voyager).  Somehow, the pair moves from talking about home cooking to the more serious discussion about reactions to audience criticisms and so many other topics.  Among those topics is that of how Mulgrew came into the role of Captain Janeway almost by chance.  Those that are less familiar with Voyager will be surprised to discover that Mulgrew got the part of Janeway after the original actress who was to play Janeway abruptly quit mere days after being given the position.  She goes on to discuss the joy of working on the show and balancing that with her own personal sadness and stress of dealing with divorce off screen.  It’s another of the more emotional moments shared throughout the interviews collected for this DVD.  Fans will find their own favorite moments when they buy or order the DVD for themselves.  It is available now in stores and online.  It can be ordered via Amazon at http://www.amazon.com/gp/product/B00D3XM3MY/ref=s9_simh_gw_p74_d0_i1?pf_rd_m=ATVPDKIKX0DER&pf_rd_s=center-2&pf_rd_r=12P7CS8DNG71Y48M096T&pf_rd_t=101&pf_rd_p=1389517282&pf_rd_i=507846.  More information on The Captains Close Up with William Shatner and other DVDs and Blu-rays from EOne is available online at http://www.entertainmentone.com.  To keep up with the latest sports and entertainment reviews and news, go online to http://www.facebook.com/philspicks and “Like” it.  Fans can always keep up with the latest sports and entertainment reviews and news in the Phil’s Picks blog at https://philspicks.wordpress.com.