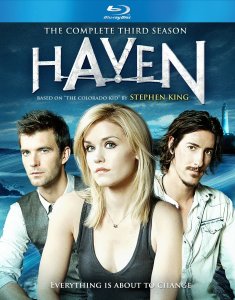 Syfy used to be one of the greatest networks on cable at one point.  It lived up completely to its name, airing primarily science fiction.  But somewhere along the line, this one great powerhouse of a network fell off and did a total 180, opting instead for really bad modern day B-movies and the like.  But in the last couple of years or so, it has looked like there might be tiny glimmers of hope with the Battlestar Galactica special, “Blood & Chrome” and the introduction of Defiance.  And then, the network took a couple more daring steps, picking up Sanctuary and Haven.  While the prior only lasted four seasons, it was a great mix of fantasy and sci-fi and was a perfect fit for the network.  Haven on the other hand, is more of a sci-fi/supernatural hybrid.  This aside, the show is still a good fit for Syfy.  And currently being in the midst of its fourth season, it will be interesting to see if it can outlast Sanctuary.  While fans take in Season Four, they can now take in every episode from the show’s third season on DVD and Blu-ray.

Things get quite interesting for both Audrey (Emily Rose) and the residents of Haven.  Secrets are finally revealed about Audrey’s past that will change her future forever.  She finds out just who the Colorado Kid is and how he is supposedly connected to her.  That won’t be revealed here for the sake of those trying to catch up with the series.  There is also an evil twin plot with a twist in the two-part episode, “Magic Hour.”  The evil twin plot is a staple of any science fiction program.  And while its execution in this two-part episode has been done before, it’s rarely been done in the format used here.  As Season Three winds down, even more revelations are made in “Last Goodbyes.”  Again, the show’s writers keep the surprises coming; so much so that audiences can’t help but keep watching.  That is the sign of solid writing.  So congratulations are in order for the show’s writers, obviously.

Writing is key to any television show’s success, regardless of genre.  And if Haven’s third season is any indication, the show’s writing is just as solid as ever, even as a serial.  In the case of a science fiction show, the writing is especially important.  But it’s not the sole factor in the show’s success.  The shooting and special effects are just as key to the show as its writing.  And both were just as expertly pulled off as the writing.  Considering Syfy’s recent track record with a majority of its programming, it would have been so easy for the people behind the cameras to go the cheesy angle.  Rather, the special effects and shooting tied in to the show are just as good as those in NBC’s sci-fi drama, Revolution and even AMC’s The Walking Dead.  That’s some pretty good company in which to sit.  And those that work tirelessly to make the show’s special effects and shooting something special.  Along with its writing, these two factors help to show why exactly why Haven is one of the best dramas on television today.

The writing, special effects, and shooting are all key components to the success of Haven in its third season.  And now that it has been released to DVD and Blu-ray box set, audiences have even more reason to be happy about their favorite show.  That reason is the included bonus features.  Season Three’s box set includes both audio commentary and more than enough bonus features to make any Haven fan squeal with glee.  Fans are treated to the full series of Haven webisodes, and all the standard behind-the-scenes footage and cast interviews.  The full making of featurette is there, too in “The Haunting Truth About Haven:  A Documentary.”    Fans will also appreciate the bonus New York ComicCon Haven panel.  This feature is the real bright spot among the bonus features.  That’s because fans really get to see the cast as themselves, rather than as characters.  The cast and writers discuss what could be expected from the showing in coming episodes and the now fourth season.  Rather than taking questions from the audience, the panel is run by a moderator.  And her questions for the cast are both serious at times and at others worthy of more than their share of riotous laughter.  The responses from the cast members are a just as serious and laugh out loud funny.  It’s one more positive to a box set that any true sci-fi fan will appreciate.  And it is available now on DVD and Blu-ray.  It can be ordered online via Amazon at http://www.amazon.com/Haven-Complete-Third-Season-Blu-ray/dp/B00DPJEWCK/ref=sr_1_fkmr0_2?s=movies-tv&ie=UTF8&qid=1379621678&sr=1-2-fkmr0&keywords=haven+the+comple+third+season.  More information on this and other releases from SyFy is available online at http://www.syfy.com and http://www.facebook.com/Syfy.