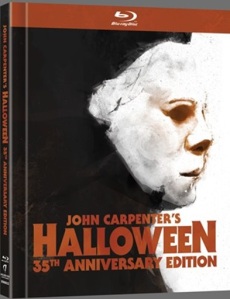 Thirty-five years.  That is how much time will have passed since John Carpenter’s modern horror flick Halloween originally premiered as of this October.  In the three decades plus that have passed since this modern horror classic made its debut, it has not lost any of its luster.  Rather, it has garnered who new generations of fans the world over.  It has seen multiple sequels and re-issues over those years.  It’s even been re-made with honor by horror aficionado Rob Zombie.  And now in celebration of its upcoming thirty-fifth anniversary, Anchor Bay Entertainment is rewarding the loyalty of the movie’s fans with a brand new thirty-fifth anniversary Blu-ray re-issue.  The upcoming Blu-ray re-issue will be available in stores and online this Tuesday, September 24th.  There are those that might have their say about this latest re-issue of Halloween, complaining about this or that about it.  What those complainers might not realize is that over the decades, the movie has garnered so many new fans, thus making re-issues necessary.  No one re-issue is going to be perfect.  Audiences on both sides of the fence need to keep this in mind before complaining.  That is in itself a massive statement about this movie.  And directly tied in to that is this generation and previous generations getting to potentially learn new facts about the movie possibly never before known thanks to the movie’s bonus features.  More than anything else, this latest re-issue is a welcome addition to any horror fan’s home library because by comparison, so many of today’s horror flicks are dry, shallow shadows of this classic.  They pale in comparison.  Having this one still available to the masses is a huge boon not only to movie lovers and horror lovers, but to the movie industry itself.  It serves to all as a reminder of horror done right.  All this kept in mind, this brand new thirty-fifth anniversary Blu-ray re-issue of Halloween is one not just for one generation but for a whole new generation.

The thirty-fifth anniversary Blu-ray re-issue of Halloween is a re-issue for not just one generation but for the generations that have all grown up with this slasher horror flick.  There are so many people out there that seem to make it their duty to do nothing but complain about it.  Those people are obviously not true fans of the movie.  Only so much bonus material can be crammed into a movie with each re-issue before it’s been seen before.  That needs to be understood right here, right now.  Anyone that already owns the movie in its previous releases will likely see many of the same bonus features in this re-issue as those re-issues.  But there are those that have never before had the chance to add this movie to their home library.  So keeping that in mind, for those people this re-issue is a brand new experience save for the movie.  Even with the movie alone, it could be like taking a trip back in time to a better time in some audiences’ eyes.

Watching the movie itself on a brand new re-issue for some may not seem like much.  For others, it’s a wonderful trip back in time, as some of the fans point out in this re-issue’s bonus documentary, “The Night She Came Home.”  Those fans really show just what the movie means to them years later.  They even talk about it with their own children right there.  These testimonials are just part of what makes this a welcome addition to this re-issue’s bonus features list.  Audiences discover through this bonus feature that star Jamie Lee Curtis is in fact not a horror movie fan.  She openly admits this early on in the documentary.  That’s a huge surprise to this critic at least.  There’s even more historical perspective added to the movie thanks to the book style case in which the Blu-ray is packaged.  The “book” style packaging includes copious notes written by Stef Hutchinson.  The notes in question take viewers even deeper into the movie’s history alongside the vintage set photos.

It should be clear by now just what makes the new thirty-fifth anniversary Blu-ray re-issue of John Carpenter’s Halloween such an important re-issue.  This is especially the case being that not only is the thirty-fifth anniversary of this landmark horror movie right around the corner, but because Halloween itself is right around the corner.  So many movies since Halloween have tried, but failed to live up to the legend that surrounds this classic.  Those movies pale in comparison.  And now with its in depth bonus features, a whole new generation will discover just how important and timeless this classic horror movie is and always will be.   It is available now in stores and online and can be ordered direct from the Anchor Bay website at http://www.anchorbayent.com/detail.aspx?ProjectId=972a6546-4a98-459c-81a2-9c0800e596f5#.  More information on this and other titles from Anchor Bay is available at the Anchor Bay website, http://www.anchorbayent.com and on Facebook at http://www.facebook.com/AnchorBayEnt.  To keep up with the latest sports and entertainment reviews and news, go online to http://www.facebook.com/philspicks and “Like” it.  Fans can always keep up with the latest sports and entertainment reviews and news in the Phil’s Picks blog at https://philspicks.wordpress.com.