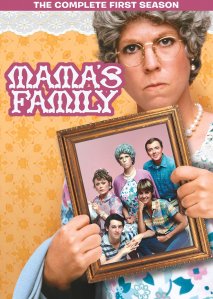 Television today is a pale shadow of what it once was.  It used to have so much heart and substance.  But somewhere along the way, something changed.  Both the heart and substance were thrown out the window in favor of programming overly laden with sex and violence.  Thankfully StarVista, Time Life and Warner Home Video have officially released another nugget of television’s past in the form of Mama’s Family Season 1 that reminds audiences of what once made television great.  The first season of this spinoff from The Carol Burnett Show is front loaded with so many laughs that even audiences not familiar with the iconic comedy will agree it’s a welcome re-issue.  It also boasts some wonderful acting on the part of star Vicky Lawrence and her co-stars.  On a more extrinsic level, audiences will appreciate Season One’s packaging.  The packaging for the discs is right along the lines of most other companies.  All things considered, Mama’s Family Season One proves in its new re-issue to be just as fun as it has ever been.  It is a highly recommended piece for anyone looking for a change of pace from what TV studios offer today.

The debut season of Mama’s Family is the funniest of the show’s six total seasons.  It offered some of the greatest writing of any sitcom of the twentieth century.  It was completely unlike anything else on the air at the time.  It took the classic nuclear family setup from older family based sitcoms and completely turned it on its ear.  Even more interesting, it did so without being too racy or edgy.  By comparison to today’s programming, that speaks volumes for this sitcom.  Mama’s Family walked a very fine line even during the 80s.  But it never crossed that line.  It’s just part of the writing that made (and still makes) it such a cult hit.  Season One also offered its share of pure laughs.  A prime example of that lies in an episode that sees Thelma and company make an appearance on the hit game show, Family Feud.  Then host Richard Dawson was even on hand for the laugh riot episode.  This was such a funny episode in that it took that dysfunctional family element and took it outside the walls of Thelma’s house into a wholly new environment.  The result is one of the funniest episodes of Season One and of the entire series.

The writing behind Mama’s Family made this sitcom unlike anything else on television at the time.  It continues to do so today.  But what is good writing without a cast to bring the scripts to life?  Luckily, the cast that made “The Family” a hit on The Carol Burnett Show were also the cast here in Season One of Mama’s Family.  It would have been so easy to replace any of the core cast with new actors for the series.  Luckily that didn’t happen.  In turn, the chemistry developed among the original cast members was allowed to develop here.  It was obvious just how much chemistry the cast had, too.  This is especially the case between Burnett and Lawrence.  Audiences will be laughing nonstop as they watch the pair argue so convincingly as if they really were mother and daughter.  The episode, “Cellmates” is proof of that.  When the pair end up in jail together, it leads to one of the funniest moments between the pair in Season One.  The occasional appearances of Betty White and Rue McClanahan as Fran and Ellen added their own extra comic element, too.  Ironically enough, the pair would go on to star together in The Golden Girls only a couple years later.  That aside, the acting of both women and the rest of the show’s cast in Season One proves to be one more reason that any true fan of comedy should watch at least this season.

Writing and acting are obviously the most important part of any television program’s success.  Both elements have made Mama’s Family a huge success even roughly three decades after it first premiered.  There is one more piece of the puzzle to examine in what makes  the newly re-issued first season of Mama’s Family a success.  That piece to the puzzle is its packaging.  Season One’s packaging follows the standard used so commonly today for multi-disc box sets.  Two of the set’s three discs are placed on either side of a plastic “insert” while the third is placed in its own spot on the back side of the case.  This standard packaging format helps to protect the integrity of the discs.  It also is more ergonomic.  Packaging usually doesn’t get much credit for DVD and blu-ray sets.  But it really is an important part of any release’s full presentation.  And in this case, it’s the icing on the cake of a much welcomed and needed blast from the past that is available now on DVD.  It can be ordered along with the larger complete set online at http://timelife.com/products/mama-s-family-the-complete-series.