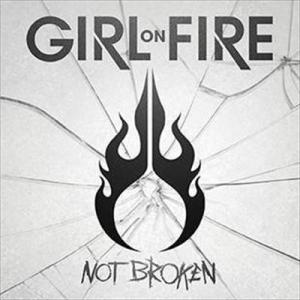 If it’s not broken, don’t fix it.  That timeless adage obviously wasn’t what Seattle, Washington’s own Girl on Fire had in mind when it came up with the title to its debut record, Not Broken.  Regardless, it is still a fitting title for the band’s debut record.  That’s because there is nothing broken about this record.  As a matter of fact, for a first outing, Not Broken is a solid record from beginning to end.  And with the proper support from mainstream radio programmers, the band could very well be the next band to add its name to the already long list of famed bands from the city.

Not Broken is a fitting title for Girl on Fire’s debut full length album.  This is despite the fact that while the band obviously didn’t have a certain timeless adage in mind when its members were coming up with a title for the album.  Not Broken will grab listeners right from the album’s opener and lead single, ‘The Takedown.’  This song is an instant fan hit with its catchy guitar riffs and equally infectious defiant chorus of “We are not afraid to bleed/Awake the strength inside/Shadows come to life.”  It’s instantly easy to see the band playing this song to a packed arena, the crowd pumping its fists and singing in unison.  Any mainstream radio programmer that doesn’t give this single a chance is missing out.  Period.  Making the song even more radio friendly is the fact that front man Austin Held and his band mates—Nick Mahan (guitar), Nicholas Wiggins (guitar), Josh Mouser (bass), and Harry MacDonald (drums)—have crafted a song that could easily lead listeners to mistake it for Linkin Park.  The song’s official music video is available online now at http://www.youtube.com/watch?v=kLCWhKV5avc&feature=youtu.be.    Held even sounds just like LP/STP front man Chester Bennington.  It’s eerie how closely similar the two singers sound.

The positive message and equally enjoyable musical side of ‘The Takedown’ doesn’t stop after the song ends.  The band keeps its energy and positivity flowing throughout the album.  This is evident in the song ‘Believe.’  The song starts off at a slow tempo with Held singing, ‘These scars/Have to be covered/Never discovered/From outside eyes/I’ve been running in circles/While losing my purpose/It’s hard to breath.”  The reason for the slower, more moody opener (and its corresponding moments) is to highlight the more uplifting sections of the song and make them more influential.  Held sings in those more uplifting moments, “And I will be strong/And I won’t hold on/To the darker side of me/When you fall/No one sings/Hide your pain/Underneath/Like the scars/They never fade/Something in you/No one can take/I believe/I believe/Let’s just believe.”  This is only a portion of the song.  But that same contrast of positivity winning out over the most negative of thoughts runs throughout the song.  It makes this one more song that every listener will both enjoy and appreciate.

‘The Takedown’ and ‘Believe’ are both excellent examples of the positive lyrical themes that populate Not Broken.  Those themes don’t end with these or other songs, either.  The album’s title track is just as powerful both musically and lyrically.  Held sings about having overcome the worst that life could handle as difficult as times might have been at one time or another.  He sings, ‘I’m not broken/I’m alive/I’ve been kicked down/But I’ll surive/Never give up/Never hide/I won’t go down without a fight/You can drag me down to the mat/You can rip my heart/Right out of my chest/I’m not broken/I’m not broken.  This kind of uplifting content is something that every listener can use at one time or another regardless of age.  That’s because even as adults, we all have people that will try to kick us down and then kick us again when we’re down.  Even through all of that, Held and company are telling listeners it is possible to have the inner strength and determination to not let such situations get us down.  This isn’t the type of thing that would only apply to younger listeners.  The gentle piano run that opens the verses set against the harder rocking chorus parts makes once again make for an excellent juxtaposition of emotions.  They expertly illustrate the two different emotions and especially highlight the possibility of  hope and personal determination.  This song, along with the previously mentioned songs (and those not mentioned) make Girl on Fire’s debut a contender to be both one of the year’s best rock records and one of the year’s best new independent albums, too.  Not Broken is available now.  It can be ordered online direct from the Century Media Records website at http://www.centurymedia.com/artist.aspx?IdArtist=512.  More information on this release, the band’s current tour in support of Not Broken and more from the band is available online at http://www.facebook.com/girlonfiremusic, http://www.girlonfiremusic.com, http://twitter.com/girlonfiremusic, http://www.myspace.com/girlonfiremusic, and http://www.purevolume.com/girlonfire.  To keep up with the latest sports and entertainment reviews and news, go online to http://www.facebook.com/philspicks and “Like” it.  Fans can always keep up with the latest sports and entertainment reviews and news in the Phil’s Picks blog at https://philspicks.wordpress.com.