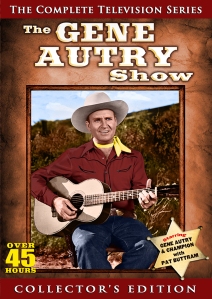 Gene Autry’s name is one that is synonymous with success.  The “Singing Cowboy” has five stars on the Hollywood Walk of Fame.  Each one is for each entertainment medium.  Yet for all of his fame, he has sadly become one of the entertainment industry’s forgotten names.  Thanks to Shout! Factory and Timeless Media, that might finally change thanks to the release of The Gene Autry Show: The Complete Series, Collector’s Edition.  This fifteen disc set is an absolute must have for any viewer.  Whether one grew up with the series, new to its stories, or just a TV history buff, everyone will find something worthwhile in this brand new set.  Audiences will appreciate more than anything the fact that The Gene Autry Show: The Complete Series, Collector’s Edition presents every one of the series’ episodes exactly as they aired in their original broadcasts.  Fans of the series will also appreciate that in this brand new set, they get no just the original TV series in its full entirety, but also a handful of rather valuable bonuses.  And just as important to note is the set’s packaging.  The set’s packaging is bare bones, but still protects each of the set’s fifteen discs, making it that much more valuable for viewers of any age.

The very first thing that audiences will appreciate about The Gene Autry Show: The Complete Series, Collector’s Edition is that every single one of the series’ episodes is presented here.  Each episode is presented in its full entirety, too.  That means that audiences get no just the episodes, but the promotional spots for the shows, sponsor, Doublemint Gum.  Casual viewers of the series might just turn their heads at this.  But those that have more understanding of its importance will applaud this inclusion.  Whereas certain other programs at the time were sponsored by cigarette companies, this series was sponsored by a chewing gum company.  That only served to make it all the more family friendly.  The same can be said of its value to families today.  If that isn’t enough for audiences, the fact that the original footage has stood the test of time so well is one more reason to be excited about this set.  The Gene Autry Show first debuted over sixty-three years ago.  Television was still technically in its infancy at that time.  Considering how impressive the footage still looks today, those charged with its preservation are quite worthy of applause in this case.  It’s just the tip of the iceberg for fans of The Gene Autry Show, too.

Fans of The Gene Autry Show will most definitely appreciate the fact that the entire series is presented in its full entirety and that it looks as good as it does almost sixty-four years after it originally debuted.  Audiences will appreciate just as much, the bonus material included in this brand new set from Shout! Factory and Timeless Media.  Shout! Factory and Timeless Media have included as bonus material a sampling of the radio shows that would lead to one of Autry’s five stars on the Hollywood Walk of Fame.  And just as is the case with the video footage, the quality of the included radio show episodes is quite impressive, too.  Timeless Media and Shout! Factory didn’t stop there.  Oh, no.  Also included are trailers for some of his more well-known works.  The set’s fifteenth disc puts its bonus material over the top.  Disc Fifteen provides audiences with two episodes each from each of the five shows produced by Autry’s own company, Flying A Pictures.  Those shows were obviously his own show, The Range Rider, Annie Oakley, Buffalo Bill, Jr., and The Adventures of Champion.  Once again, one has to note the quality of the footage.  The quality of the footage stands out, as does the enjoyment factor of each of the shows’ two episodes.  It serves to make the set as a whole even more worth its roughly $80.00 MSRP.

The bonus material included in The Gene Autry Show: The Complete Series, Collector’s Edition and the inclusion of the entire series itself are the most important of factors in this set’s release.  But they aren’t all to be considered.  The set’s packaging must also be taken into account.  And the packaging will impress audiences just as much as everything else already noted.  Each of the set’s fourteen primary discs are placed one on either side of seven separate slip cases.  The bonus fifteenth disc is given its own spot inside its own case.  The set’s fourteen primary discs are protected from one another and from themselves, being placed in their own spot inside each of the set’s seven slip cases.  The same can be said of the bonus fifteenth disc.  And the exterior box that holds all fifteen discs is just as simplistic.  As simplistic as it is, audiences will enjoy the extra information on the show provided on the rear of the box.  It is provided here in place of an extra booklet.  Extra information is also provided on each of the set’s separate slip cases, too.  The inclusion of so much background information set against the simplistic yet smart packaging brings everything full circle with this set.  Taking it and the set’s bonus features and main material into account, it all collectively makes The Gene Autry Show: The Complete Series, Collector’s Edition one of the most valuable time capsules of television history to be unearthed in a very long time.  It will be available Tuesday, December 10th on DVD and can be ordered direct from the Shout! Factory online store at http://www.shoutfactory.com/product/gene-autry-show-complete-tv-series.  More information on this and other releases from Shout! Factory and Timeless Media is available online at http://www.shoutfactory.com and http://www.facebook.com/shoutfactoryofficial.  To keep up with the latest sports and entertainment reviews and news, go online to http://www.facebook.com/philspicks and “Like” it.  Fans can always keep up with the latest sports and entertainment reviews and news in the Phil’s Picks blog at https://philspicks.wordpress.com.