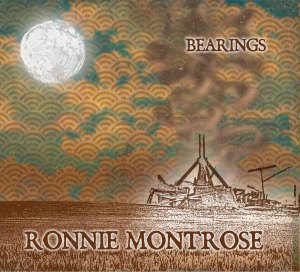 Guitarist Ronnie Montrose was one of the music industry’s busiest individuals during the course of his life.  Montrose, who died last year of a self-inflicted gunshot wound, was one of the most respected guitarists in the music industry.  Despite the respect that he earned among his fans and fellow musicians, he never gained the level of fame that those musicians gained.  It had been known that he had been suffering from depression at the time of his death.  So it is perhaps no wonder that the music on his final recording, Bearings, is in large part, very reserved.  The fourteen total tracks that make up the album are so painful yet just as beautiful in their emotional depth, too.  Of course for all of the reserved emotion displayed throughout most of this album, there are more upbeat songs, too.  One of those more upbeat songs is the album’s opener, ‘All Aboard.’

‘All Aboard’ is a prime example of Montrose’s exemplary talents right from its opening seconds.  The song comes in at just under three minutes in length.  In the course of that three minutes, he showed in this song that his talents were right up there with the likes of Zakk Wylde, Steve Vai, Steve Morse, Joe Satriani and so many other equally talented guitarists.  What makes this so interesting is that this song actually bears more of a country/bluegrass vibe about it than that of a rock song.  It would be so easy to see Ronnie sitting on the back porch of a large house somewhere out in the middle of nowhere, playing this piece.  Just as interesting to note on this song, is that Montrose also covered the song’s mandolin part, and the equally driving bass.  The layering of the three parts, which was also largely handled by Montrose let each part come through just enough to give a full assembly effect.  In turn, what listeners get in ‘All Aboard’ is a solid ad aptly titled opener to this record.

‘All Aboard’ is impressive to say the least.  It is impressive because of the talent displayed by Montrose both as an instrumentalist and as a producer.  He showed that he more than knew his stuff.  Just as much an example of his talent (and that of his fellow musicians) is the album’s fifth track, ‘Morning.’  Just as ‘All Aboard’ was aptly titled, so is this near five-minute song.  Ronnie was joined by percussionist Michele Graybeal and keyboardist Ed Roth for a song that stands out in so many of its own ways.  The gentle strains of Montrose’s guitar set next to Roth’s role on piano give this song so much life.  Graybeal is not to be left out either.  The use of what is either a small bongo drum or even a tabla is a subtle addition.  But it is just enough to add a certain extra something to the song.  One can close one’s eyes, and see the sun slowly coming up over a mountain range perhaps after a late night thunderstorm.  Others might see something else in hearing this song.  And they would be right, too.  That’s the beauty of completely instrumental music. It is one hundred percent open to interpretation.  And it’s just one of many songs that will lead to any number of interpretations on Montrose’s last recording.

The songs included in Bearings could be interpreted in so many ways.  That has already been noted.  No one interpretation would be wrong, either, regardless of who is interpreting the song.  One more example of that ease of interpretation comes in the form of the album’s penultimate piece, ‘Lighthouse.’  The song’s very title invokes images of a lighthouse set on a cliff.  The music itself feeds an even richer vision.  This critic alone sees images of said lighthouse overlooking a calm ocean on a warm summer night.  The sun is setting off in the distance.  The gentle fade of the music in the song’s closing seconds sees the sun setting below the horizon and the moon and stars taking over in the sky.  Again, this is just one critic’s view of this beautiful work.  Others might have their own visual interpretation of the song.  And those interpretations would be just as right.  Much the same can be noted of the album’s other songs, too.  That is exactly why any true music lover will want to hear this record at least once.  It not only displays a late musician’s talents once more, but also displays said musician’s ability to evoke so many different emotions among his audiences.  The album is available now online.  It can be ordered direct from the official Ronnie Montrose website at http://www.ronniemontrose.com/merchandise/index.php?main_page=product_info&cPath=65&products_id=237&zenid=2f9f4e8f36f439800dd5f1b97f4131fb.  More information on other Ronnie Montrose releases is available also available at http://www.ronniemontrose.com.  To keep up with the latest sports and entertainment reviews and news, go online to http://www.facebook.com/philspicks and “Like” it.  Fans can always keep up with the latest sports and entertainment reviews and news in the Phil’s Picks blog at https://philspicks.wordpress.com.