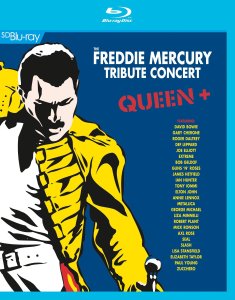 Freddie Mercury, the late front man of the legendary rock band Queen, was in his time one of the single most charismatic vocalists in the music industry.  Many vocalists have tried to emulate the legendary singer’s energy and style.  Few if any have succeeded.  Sadly, Freddy Mercury was taken from the world in 1991, one of so many victims of the then emerging AIDS epidemic.  The music world paid tribute to his legacy and memory in 1992 with a special live tribute concert.  The concert, held at London’s Wembley Stadium has become one of the biggest and most  powerful live concert events of the Twentieth Century, even after more than two decades since it was originally held.  The only concert event that could compare to this event is Woodstock ’94.  And now thanks to Eagle Rock Entertainment, the legacy of Freddie Mercury lives on once again thanks to the Blu-ray release of The Freddie Mercury Tribute Concert.  While this SD Blu-ray release of The Freddie Mercury Tribute Concert is not the first time that the concert has been released to the masses, this release is the concert’s best yet.    There is so much to be said of this latest re-issue.  The best place to start is the overall audio and video presentation.  Those charged with resurrecting the original footage are to be commended as the concert is presented here in its full original glory.  Audiences get to see the show as it looked in its original recording.  The audio sounds just as good.  This is especially the case for those with home theater systems.  The cinematography is incredible to say the least.  The crowd shots and shots of the crowd from the stage are collectively the epitome of the adage that a picture is worth a thousand words.  And of course, there is also the show’s set list and list of performers.  Both by themselves and collectively, they make a bold statement that puts the finishing touch on this incredible latest re-issue from Eagle Rock Entertainment.

The first and most obvious factor to investigate in Eagle Rock’s new re-issue of The Freddie Mercury Tribute Concert is the audio and video mix.  This concert was recorded almost twenty-two years ago.  April 20th, 2014 will mark the twenty-second anniversary of this landmark concert.  Being that high definition recording was still years away when this concert was recorded, it’s obvious that the quality of the footage would not be crystal clear in this presentation.  But Eagle Rock openly noted on the recording’s case that this presentation is a Standard Definition Blu-ray.  That means that Eagle Rock openly notes that the presentation contained therein is a standard definition recording.  Those expecting pure 1080 quality video have only misled themselves.  Eagle Rock Entertainment is not to blame here.  That the footage still looks as good as it does over two decades later is a testament to those charged with maintaining and resurrecting it.  And having the option to set one’s TV to “Cinema” to gain the full concert video experience only serves to make it even better.

The quality of the concert’s video footage is impressive to say the very least.  It is presented in its original 4:3 aspect ratio.  Though, with the advent of high definition televisions, most viewers can set their monitors to present the concert in full “Cinema” mode.  That mode shows better than any how well the footage has stood the test of time.  The audio mix is just as impressive as the video in terms of its quality.  Every riff, every beat, and every chorus from the crowd of thousands is enhanced on this re-issue.  In comparison to the concert’s previous releases, the audio mix has never sounded better.  It has been enhanced so much that at times, the echoes of Brian May’s voice as he talked will make audiences think they are actually there in person.  It has been mixed that well.  That is quite the testament to those charged with restoring this concert to its former glory.  And along with the footage, it is one part of a very strong cornerstone of this recording.

The video and audio mixes serve collectively as a solid base for The Freddie Mercury Tribute Concert.  The concert’s cinematography adds an extra element of enjoyment to the recording, too.  Much as was the case with Eagle Rock’s release of The Rolling Stones’ Hyde Park Live this Fall, the camera shots obtained over the course of this concert are extraordinary.  There is something to be said about an entire stadium full of people singing in unison, arms high in the air, clapping in time. The visual effect both from the stage and from high above the sea of bodies is something that cannot be put into words.  It is something that must be seen to be fully appreciated.  Even seeing the shots in question from one’s own sofa, bed, etc. is awe inspiring.  They collectively go to show the love that so many people had for Freddie Mercury and for Queen.  While the concert’s audio and video mixes are the foundation on which the concert rests, the shots obtained by the camera crews give the show its shape.  And what a shape those crews give the concert.

As one should be able to tell from everything noted already, there is much to like about Eagle Rock Entertainment’s new re-issue of The Freddie Mercury Tribute Concert on SD Blu-ray.  Much has already been examined with this latest release from the leader in live recordings.  But it would not be complete without making mention of the concert’s set list and its equally diverse lineup of performers.  The show itself is set up into two separate segments.  The first of those segments is the “Opening Acts” segment.  This segment allows some of the acts tapped to perform at the concert to perform their own music and warm up the crowd at the same time.  This segment runs the gamut to say the very least.  It opens with a trio of songs from Metallica and follows that up with a medley of Queen hits courtesy of Extreme.  Guns N’ Roses (the original Guns N’ Roses) closes out the opening acts segments.  Def Leppard is also one of the opening acts.  Their front man, Joe Elliot, joins Elton John, George Michael, David Bowie, Annie Lennox, and so many other acts from across the music industry for the “Main Show” segment of the recording.  Having such a wide array of artists covering the music of one band is a bold statement.  It shows the impact that Queen had on them as bands and artists.  It also goes to show the respect that those bands and artists had for Freddie Mercury.  It goes to show the kind of person he was and how important he was to so many around him.  Keeping that in mind while watching the incredible shots, and hearing the equally incredible song selections is sure to bring a smile and maybe even a tear to some viewers’ faces.  If it does one, the other, or both, then it has most certainly done its job.  It means that Eagle Rock is that much more justified in once again unearthing this important piece of music history.  It is available now in stores and online.  More information on this and other live recordings from Eagle Rock Entertainment is available online at http://www.eaglerockent.com and http://www.facebook.com/EagleRockEnt.  To keep up with the latest sports and entertainment reviews and news, go online to http://www.facebook.com/philspicks and “Like” it.  Fans can always keep up with the latest sports and entertainment reviews and news in the Phil’s Picks blog at https://philspicks.wordpress.com.