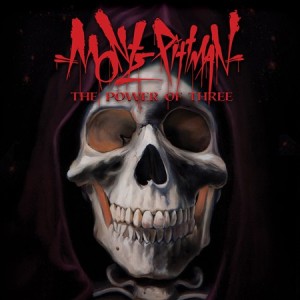 2014 is only a week or so old.  Despite the infancy of the year, things are already picking up within the music industry.  If the many lists of the year’s most anticipated albums are any indication, there is a lot to look forward to this year.  That’s especially the case in the world of rock and metal.  Albums from Slipknot, Tool, Earth Crisis, Corrosion of Conformity, Foo Fighters, Mastadon, Black Label Society, and so many others are already making purist rockers and metal heads the world over excited about the months to come.  Now, yet another performer has added his name that already extensive list of bands and artists whose albums are highly anticipated this year.  The performer in question is Monte Pittman.  Pittman will release his new album The Power of Three.

The Power of Three is quite the interesting listen for those that might be unfamiliar with his body of work.  While Pittman has had the honor of recording and touring with veteran New York based metal band Prong, he is most well-known for his work with none other than Madonna and former American Idol contestant Adam Lambert.  He has also recorded with former Spice Girl Melanie C. on her 2003 album Reason.  Considering that he has spent more time recording and touring with pop artists, Pittman’s new record, which will be released via Metal Blade Records on January 21st, will shock audiences.  That’s because it is anything but a pop record.  Rather, he and his band mates—Kane Richotte (drums) and Max Whipple (bass)—have crafted a ten-track record that is an early contender for a slot on this critic’s list of the year’s best hard rock records.  The album’s second song, ‘Delusions of Grandeur’ is a pummeling song that hints at influences from the likes of thrash pioneers Pantera.  This is the case at least in terms of the song’s musical side.  Pittman’s guitar work, alongside Kane Richotte’s solid drumming, make this an excellent first impression from Pittman and company.  Pittman shreds with the best of them.  And his vocal style may even lead some to compare it to that of Fireball Ministry front man James A. Rota III.  Whipple adds just enough low-end to bring everything together in this song.

Just as interesting to take in on this record is the album’s opener and lead single, ‘A Dark Horse.’  What makes the song so interesting is that there almost seems to be an old school Black Sabbath influence mixed into the song’s more prominent modern metal sound throughout its bridge and verses.  One wouldn’t think the two sounds would gel.  Low and behold, they work quite well together.  As a matter of fact, there’s no doubt that Pittman and company will have listeners putting their horns high with pride.  Yet again, all three members of the band work together here to make a song that will leave listeners breathless by the end of its near five-and-a-half-minute run time. And as with the album’s other songs, the production is just as solid as the music itself.  Not one member of the three-man organization overpowers the other at any one point throughout the song.

For all of the heavier material that comprises this record’s body, Pittman also proves that he can hold back even if only a little bit.  That’s evident in the almost Alice in Chains style ‘Everything’s Undone.’  Even more intriguing about the song is that the setup in the song’s opening moments may even conjure thoughts of Aerosmith’s ‘Back in The Saddle Again.’  It’s only momentary.  But it’s there.  On its lyrical side, it comes across as being rooted in the standard relationship issues that make up so many songs.  He sings, “Driving faster/getting closer/But I feel farther from you/Here we go again/Who’s to blame/Am I gonna get closure from you/Now you’re gone/Is there something I’ve done wrong…Now everything’s undone.”  It’s pretty obvious that Pittman is delving into a personal realm here.  The catch is that unlike so many songs that are rooted in relationship issues, this one takes that lesser travelled road, opting for a less “oh, woe is me” vibe and more for something with energy about it.  This is the case even in the song’s chorus. The song as a whole is just one more that makes this upcoming album well worth the listen and a definite early contender for a spot on this critic’s list of the year’s best new hard rock/metal albums.  Fans will get to hear even more music from Pittman and his band mates when they perform February 22nd at Los Angeles’ famed Whisky A Go Go.  Tickets for that show can be purchased via Pittman’s official website, http://montepittman.com. Fans can keep up with the latest addition to Pittman’s tour schedule and all of his latest news online at http://montepittman.com, http://www.facebook.com/MontePittman, http://www.myspace.com/montepittman, and http://twitter.com/montepittman.  To keep up with the latest sports and entertainment reviews and news, go online to http://www.facebook.com/philspicks and “Like” it.  Fans can always keep up with the latest sports and entertainment reviews and news in the Phil’s Picks blog at https://philspicks.wordpress.com.

1 thought on “The Power Of Three Has Potential Staying “Power””