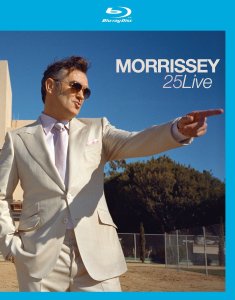 Steven Patrick Morrisey—a.k.a. Morrisey—has been making music for almost three decades.  He started his career as the front man of the British rock band The Smiths way back in the 1980s.  Since that time, Morrisey eventually struck out on his own and made quite the name for himself in the process.  Now all those years after he first rose to stardom, Eagle Rock Entertainment has offered to Morrisey’s fans a special treat in the form of his new live DVD and Blu-ray, 25 Live.  This extensive live recording is one more example of why Eagle Rock remains the sole leader in live recordings.  The nearly ninety-minute performance boasts some nineteen songs that span Morrisey’s career.  The audio and video mix serve to make the concert even more enjoyable for fans.    Add in a bonus live, in-studio session complete with four performances and audiences will agree that they get in this recording, a real treat for any long-time Morrisey fan.

The very first aspect of 25 Live that audiences will appreciate is its career spanning set list.  The concert’s set list runs nineteen songs deep and just short of ninety-minutes.  Morrisey and his backing band—including veteran Morrisey guitarist Boz Boorer—waste no time getting the crowd moving as it kicks into ‘Alma Mater’ and ‘Ouija Board, Ouija Board’  The band’s energy barely lets up even for a second throughout the course of the concert.  The most incredible moment of the concert comes in the show’s closing number, ‘The Boy With The Thorn In His Side.’  It’s during this final song of the night that the audience in attendance basically erupts.  People in the audience start trying to rush the stage if only to get close to Morrisey.  His security detail was quick to whisk said individuals back into the crowd.  But the last person to get up on stage, they leave alone.  That last person is a young boy that could not have been more than perhaps ten or eleven years old.  The security guards instantly back off as Morrisey welcomes the boy and keeps singing at the same time, not missing even a single note.  That showed real class both on the part of Morrisey and his security team.  It shows the respect that he [Morrisey] has for his fans.  It’s a short moment.  But it’s one of the concert’s truly moving moments.  There are other great moments throughout the show.  And fans will each find their own favorite moments when they purchase this concert for themselves.

The set list that makes up 25 Live is key to the enjoyment of this recording for Morrisey’s fans.  But the set list would be nothing without the show’s expert audio and video mix.  Director James Russell is more than deserving of his share of applause for his work on the show.  The almost frantic manner in which the show is captured from song to song adds to the energy exuded by Morrisey and company as they perform for their fans.  The audio mix manned by Tim Summerhayes adds even more to the viewing experience.  As much goes on in the course of each song, it would have been so easy to let the mix get out of hand.  But that wasn’t the case here.  Each part complimented the other just as well as the various shots of the show.  That expert audio and video mix set alongside the show’s set list make 25 Live all the more enjoyable.  Though there is still one more factor to consider with the recording that puts it over the top.  That factor is the show’s bonus live, in-studio session puts this recording over the top.

The set list included in 25 Live and its audio and video mix all combine to make the recording’s main feature a joy for any of Morrisey’s fans.  The show’s bonus live, in-studio session puts the whole presentation over the top.  The bonus live, in-studio includes exclusive performances of four songs.  Those songs are: ‘The Kid’s A Looker’, ‘Scandinavia’, ‘Action Is My Middle Name’ and ‘People Are The Same Everywhere.’  These are performances that fans won’t get anywhere else.  And while it is just four songs, somehow Morrisey and company make them feel like so much more.  It’s difficult to put a finger on just how this is possible, but each song feels like it has so much substance about it.  It is the finishing touch on this presentation and puts the whole thing over the top.  Fans can experience it all for themselves when they pick up the DVD or Blu-ray for themselves. It is available now in stores and online.  More information on this and other releases from Eagle Rock Information is available online at http://www.eagle-rock.com and http://www.facebook.com/EagleRockEnt.  More information on Morrisey is available online at http://www.facebook.com/Morrisey.  To keep up with the latest sports and entertainment reviews and news, go online to http://www.facebook.com/philspicks and “Like” it. Fans can always keep up with the latest sports and entertainment reviews and news in the Phil’s Picks blog at https://philspicks.wordpress.com.