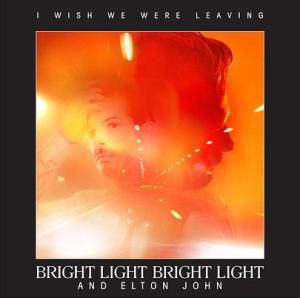 Rod Thomas a.k.a. Bright Light Bright Light will release his new EP this Spring.  I Wish We Were Leaving will be released digitally April 7th, 2014 via Self Raising Records.  The EP’s title single is available for download now via iTunes at https://itunes.apple.com/us/album/i-wish-we-were-leaving-single/id822205953?ign-mpt=uo%3D4.  It can be streamed online now for free at http://www.theguardian.com/music/musicblog/2014/feb/21/elton-john-new-music.

Thomas was joined by a very famous singer on the title track to his new EP.  He was joined by none other than legendary singer Elton John.  Thomas explained in an interview how the collaboration came about.  “When I was producing the song on a very dramatic rainy day, I had a phone call from Elton saying he liked my first album, which blew my mind,” he noted.  “From then, I kept hearing his voice on the track. In time, I played him [the song] ‘I Wish We Were Leaving’ and he added his vocals. Although it wasn’t written as a duet, I love that his voice taking lead in the second verse is a reminder that every relationship has two sides and two voices.”

Sir Elton also commented on the collaboration.  He noted that working on the track was different from anything he was used to because he was unfamiliar with the recording process with music in the electronica genre.  But he was still optimistic about recording the song.  “Working with Bright Light Bright Light was a challenge for me as I love Electronica but am quite ignorant on the recording process,” he said.  “I had to sing in a completely different way which I really enjoyed. The song spoke to me as soon as I first heard it, and I think that the combination of our voices is ethereal and beautiful… as is the song.”

Thomas’ upcoming EP is not his only expected work scheduled for release this year.  He also has an as yet untitled full length album slated for release this Summer.  The track listing for I Wish We Were Leaving has been made available below.