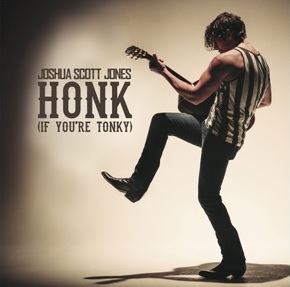 Joshua Scott Jones, one half of the country duo Steel Magnolias, officially debuted the video for his new single ‘Honk (If You’re Tonky)’ this week.

The video is the companion piece to the lead single from Jones’ debut solo album The Healing, which is due out later this year.  It can be viewed online now via YouTube and Vevo at http://www.youtube.com/watch?v=CqdJRcJF7Qk and http://www.vevo.com/watch/joshua-scott-jones/honk-if-youre-tonky/QMGR31400913 respectively.  Fans can download Jones’ new single now via iTunes at https://itunes.apple.com/us/album/honk-if-youre-tonky-single/id789803809.

Jones shared his rather surprising inspiration for the video in a recent interview saying it was actually inspired by a well-known pop star.  “I had the idea for the video from Beyonce’s ‘Single Ladies,’ he said.  “I wanted to make a dance video, but a honky tonk style video, so we shot half of it in black and white, and the other half in color. It was me, and two dancers…It’s edgy, cool, and upbeat. I think it’s something people won’t want to take their eyes off of.”

In regards to the song itself, Jones says it is a song for all the men out there.  “‘Honk (If You’re Tonky)’ spoke very loudly to me right off the bat as an anthem for guys,” he says.  “It speaks to the misunderstood side of men, that makes us rough around the edges while carrying the burden of a big heart and just wanting to live in harmony with yourself. What better than an ‘anthem’ for a first single?”

Jones self-produced his new upcoming solo debut record as well as handling many of the instrumental duties, too.  He went on in his interview to explain the meaning behind his new album in whole and what the album means to him as an artist.  “I feel like it’s really a chance for my voice to be heard. It’s really a personal record that reflects on my head space over the past few years and what I’ve been through,” he said.  “I’m excited about it because I think it will translate well to all the fans we had as a duo in Steel Magnolia. I tried to take them with me for the ride, and gain a few more. It means a lot to me.”

Jones already has a small handful of live dates scheduled in support of his new single and upcoming album. He will perform next Monday, March 7th at the Warehouse in East Battle Creek, Michigan.  The following night, he will be at the Diesel Lounge in Chesterfield, Michigan.  From there, he will make his way to dates in Pennsylvania and Florida.  Jones’ most current list of tour dates is available below.