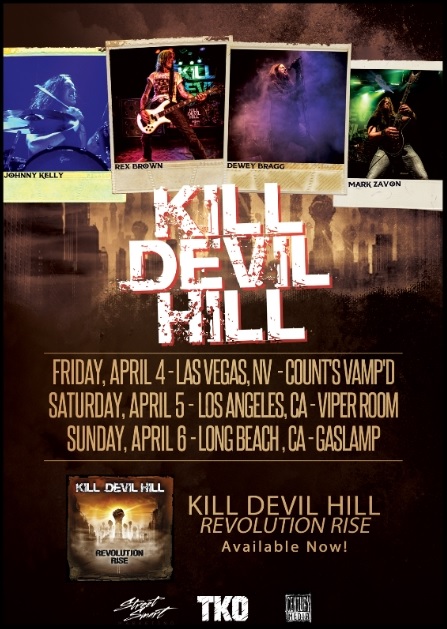 Kill Devil Hill announced this week the addition of former Type o Negative drummer Johnny Kelly to its lineup.  Kelly, who also performs with Danzig and his own band, A Pale Horse Named Death, takes the place of the bands now former drummer, Vinny Appice.

Appice released a statement on his departure.  “It’s been a great musical adventure from the beginning, but the time has now come to go our separate ways and continue to make music that we love,” he said of his decision.

KDH bassist Rex Brown had nothing but good things to say of Appice after Appice’s announcement that he would be departing the band.  “We all have a lot of love and respect for Vinny and have been honored to have jammed with him over the last few years – we wish Vinny well with all his future endeavors, it has been a blast!”

Kelly talked to the press on the announcement expressing his thoughts on taking on drumming duties for the band.  “I’m really excited about coming on board with Kill Devil Hill,” he said.  “I’ve been a fan since their debut and have known the guys for a long-time. It’s also clear that I have some really big shoes to fill. I’m ready for that challenge as I prepare for KDH’s next chapter – this is gonna be a blast!”

Kelly will get his first chance to display his chops live the weekend of Friday, April 4th – Sunday, April 6th.  The band will play Count’s Vamp’d in Las Vegas, NV April 4th.  That show will be followed by a performance at L.A.’s famed Viper Room on Saturday, April 6th and a show at the Gas Lamp in Long Beach, CA on April 6th.  From there, the band will head overseas for a handful of tour dates in Australia with Killswitch Engage from April 11th – 16th.