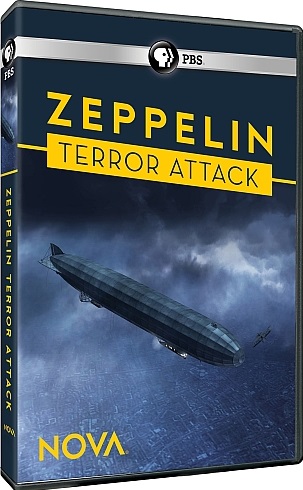 Zeppelin Terror Attack is another impressive addition to PBS’ hit science series, NOVA. This edition of NOVA is a great watch for the same reason that so many of NOVA’s episodes are so enjoyable. That reason is that it reaches more than just one specific niche audience. That is the primary reason for the success of this episode. Another reason for this episode’s success is the very history given on the impact of zeppelins on the outcome of World War I. Lastly, the acting and visual aids used over the course of the documentary put the finishing touch on the success of this episode of NOVA. All of these elements together make Zeppelin Terror Attack yet more proof of the value of not only NOVA but of PBS as a whole.

The first aspect of Zeppelin Terror Attack that makes it another enjoyable addition to NOVA’s long-held tradition of excellence is its ability to reach so many audiences within such a short period of time. It is a piece that proves NOVA covers more than just science. It can reach history buffs, military history buffs, military buffs in general, and even those with an interest in engineering. There are so many stories centered on the history of World War II out there. Yet there are seemingly far fewer stories centered on the first world war. So it is nice to have this presentation, taking audiences back to a time that is so rarely discussed today. History buffs, military history buffs, and military buffs in general will appreciate the history lesson taught through this episode. Those with an interest in engineering and avionics will appreciate the discussion on how Zeppelins were built, and how their Achilles heel was eventually discovered by the British. Who would ever have thought that the intestinal linings of a cow would be used for the skin of a zeppelin? Paul Shepard’s editing is spot on when this is first revealed. Audiences will find themselves laughing at the reaction of a random cow when this revelation is made. Just as interesting for those interested in engineering and avionics is the discussion on how Zeppelins today use helium instead of hydrogen to float. And despite the evolution of the zeppelin, it still faces the issue of helium slowly escaping from its ballast. There is much more that each of this episode’s audiences will take away from it for themselves. They will have to order the DVD for themselves, though, to find out just how much it has to offer in that realm.

The fact that Zeppelin Terror Attack can reach so many audiences is central to its success. It’s nothing new to NOVA, either. This is a long-standing tradition for this top notch science show. Another reason that audiences will appreciate this episode of NOVA is that it brings one of so many currently untold stories of WWI to light at long last. Whenever most people think of WWI, the very first thought that comes to mind is the novel All Quiet on the Western Front. Other than that sole story, most people would be hard pressed to come up with a story about WWI if asked to do so. Taking that into consideration , this story is a nice starting point for even more discussions and stories centered on WWI. As much as the world still needs the stories of WWII, the stories of WWI are just as vital to the world’s history as those of WWII. So kudos are in order for the heads at PBS and at NOVA for bringing this story to light. And here’s to perhaps many more to come.

The story itself that is told through Zeppelin Terror Attack and the fact that it can reach multiple audiences collectively make this episode of NOVA another excellent addition to PBS’ hit series. There is one more aspect to this episode of NOVA that is standard to the series, making it all the more enjoyable for viewers. That last aspect is the episode’s visual aids. The visual aids used throughout this episode include vintage footage of Germany’s initial bombing of Britain and CG sequences outlining how the zeppelins’ weak spots. There are also other CG sequences that show the path taken by the Zeppelins into Britain along with actual acting segments used to help further illustrate the story. These elements are collectively what once made the documentaries from History Channel and Discovery Channel so impressive. But ever since the advent of reality television, those documentaries have gone by the wayside on those once powerhouse networks. Now, they are what make this and so many documentaries on PBS so great and so worth watching. Audiences can order the DVD online now at http://www.shoppbs.org/product/index.jsp?productId=30499076&cp=&kw=zeppelin+terror+attack&origkw=Zeppelin+Terror+Attack&sr=1. To keep up with the latest sports and entertainment reviews and news, go online to http://www.facebook.com/philspicks and “Like” it. Fans can always keep up with the latest sports and entertainment reviews and news in the Phil’s Picks blog at https://philspicks.wordpress.com.