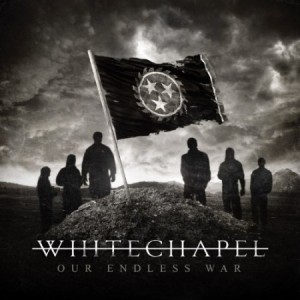 Veteran metal band Whitechapel released the video for the title track to its new album this week.

The video, which can be viewed online now at http://www.metalblade.com/whitechapel, features footage of the band performing live over the song. Guitarist Alex Wade explained, noting that “this video was shot over the past few tours and shows the intensity of our live show.” After the song’s done, fans can stick around for discussions from the band on the creation of Our Endless War through a series of segments. The video’s release coincides with the band’s tour, which kicked off last week in St. Louis, Missouri. Whitechapel is currently touring alongside Devildriver, Rivers of Nihil, Revocation, Carnifex, and Fit For An Autopsy in support of its new album. Along with its current performance scheduled for today, Whitechapel is also slated to perform live at the Tremont Music Hall in Charlotte, North Carolina on June 14th. The band’s current tour schedule is listed below.