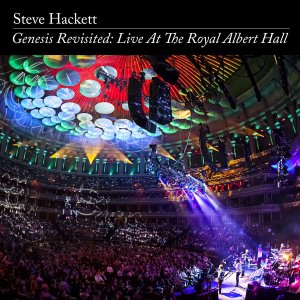 Courtesy: Inside Out U.S.

Former Genesis guitarist Steve Hackett’s follow-up to his live 2013 box set Genesis Revisited: Live at Hammersmith is a solid companion piece to that release. While Hackett’s former band mates were not a part of this latest live recording (or his previously released live show at the Hammersmith), the musicians with whom he surrounded himself are just as talented as them. That is the first piece of this recording’s success. Another aspect worth noting in the concert’s recording is the show’s set list. And the multiple formats in which the performance is available solidifies the whole thing as one of the best new live recordings of the year.

Steve Hackett and his former Genesis band mates may no longer be performing or even recording together. It would be a dream come true for Hackett to reunite with at least one incarnation of Genesis if only for a one-off show. In their stead though, Hackett has surrounded himself with quite the stable of musicians and artists. Roine Stolt (the Flower Kings), Gary O’Toole (Chrissie Hynde, Kylie Minogue), Rob Townsend (Eddie Henderson, Bill Bruford, Django Bates), Lee Pomeroy (Rick Wakeman, Take That), Nad Sylvan (Unifaun, Agents of Mercy), and one time Genesis vocalist Ray Wilson joined Hackett for this performance. Also on board for the show were John Wetton, Amanda Lehmann, and Roger King (Snoop Dogg, Gary Moore, Jamelia). This collection of performers is just as talented as any incarnation of Genesis over the decades. Gary O’Toole covers the drums and percussion with the same ease as Phil Collins in his heyday. And Hackett soars throughout every song. Each of the group’s members gets their own moment in the spotlight, too. That is made evident through the show’s extensive set list, which is just as important to this recording’s success as the group assembled for the show.

The musicians brought on board for Steve Hackett’s Royal Albert Hall performance each bring their own expertise to the concert. They may not be the original Genesis lineup. But they are just as impressive as those musicians if not more so. Their talent is not all that is worth noting in this latest upcoming live Genesis Revisited recording. The show’s set list is just as worth nothing. It totals eighteen songs and approximately two hours and fourteen minutes. Not a single second of the nearly two and a half hours is wasted, either. The inclusion of fan favorites such as ‘Dance on a Volcano,’ ‘The Musical Box,’ and ‘Los Endos’ among so many others makes the recording even more enjoyable. Add in a number of rather extended songs and solid stage performance from every member of the band, and audiences get even more reason to check out this recording.

The collective stage presence on the part of Hackett and his fellow musicians, and the show’s extensive set list together are more than enough reason for any Genesis fan to check out this latest live release from Steve Hackett. There is still at least one more reason for Genesis fans to pick up this latest release from Hackett. That reason is the recording’s multiple presentation formats. The presentation reviewed here is that of the audio only CD recording. It is also available as a triple-disc 2CD/DVD digipack, and limited edition 2cd/2DVD/Blu-ray art book that includes liner notes, photos, and bonus interview segments. It was all recorded in 5.1 Surround Sound. So in total, Steve Hackett: Genesis Revisited—Live at the Royal Albert Hall will actually be available in not one, not two, but three separate formats upon its release next Tuesday, July 8th. The concert’s multiple presentation formats work in tandem with the concert’s extensive set list and the talent of the performers (as well as their o0n-stage presence) to make this latest live Genesis Revisited concert one of the best of 2014.