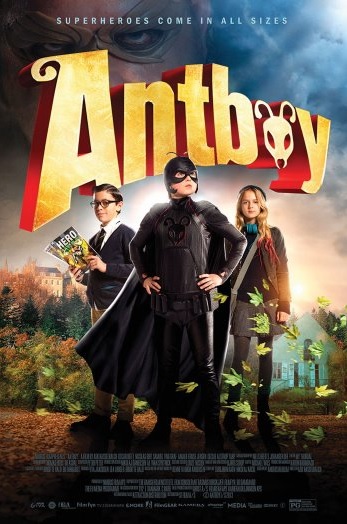 Cinedigm’s Danish import Antboy is a surprisingly entertaining movie for anyone that is a fan of the superhero genre.  There is plenty to be said of this mostly family friendly flick beginning with the fact that it is indeed family friendly.  This ties directly in to the movie’s script, which will be discussed momentarily.  Just as noteworthy is the work put in to dub the movie’s originally Danish language into English.  Unlike other foreign films that have been dubbed for English audiences, this one actually impresses to a point.  And last but not least, the movie’s comic book on-screen look puts the finishing touch to the presentation.  The combination of all three of these factors together makes Antboy a movie that while hardly a blockbuster caliber work, one worth watching as a family at least once.

The most noticeable aspect of Antboy that audiences will appreciate is that unlike so many of its major blockbuster counterparts, it is actually a family friendly movie.  It seems an increasing trend nowadays for both Marvel and DC to make their movies dark and gritty.  Why?  If not that, then they are being rebooted with an eye specifically towards teen audiences.  The upcoming reboot of Marvel’s Fantastic Four movie and DC’s upcoming The Flash series are prime examples of that trend.  On the avenue of dark and gritty, one look at DC’s Man of Steel and Dark Knight Trilogy are proof of the trend towards darker and grittier movies.  They aren’t the only ones that are following that path, either.  Considering all of this, it’s nice to see a movie like Antboy come along.  It isn’t dark and gritty.  What’s more, it presents some wonderful themes of friendship and believing in one’s own self.  Even better is that the movie’s hero, Pelle, isn’t the standard brooding anti-hero figure that has become so popular among its big brothers in theaters and on television.  This factor alone makes Antboy well worth at least one watch by audiences of any age.

By direct relation to Antboy’s family friendly nature is its script.  It takes a cue from Marvel’s Spiderman.  But it doesn’t go so far as to directly rip off said franchise.  Instead, Pelle is bitten by a genetically modified ant, and ends up developing the powers of an ant.  And fittingly, his arch nemesis is a baddie by the name of “The Flea.”  “The Flea” is a former scientist whose research on ants had been cut by the head of his place of employment.  The story presented by “The Flea” on his origin is actually interesting in that it makes him something of a sympathetic character strangely enough.  He was just a good guy who had been poorly treated by those over him and was pushed too far, thus leading to becoming the villain that he was.  It’s just another part of the script that makes the whole story easier to believe.  Pelle’s eventual realization that it’s okay to not be popular through it all makes the script even better.  It’s another example of how this story at least strives to set itself apart from its big budget brethren.  Those movies see their main characters struggle with their dual identities and lives.  In the case of this story, the main figure embraces his two separate roles.  Having so much difference from all of the major superhero blockbuster is a big plus to this movie.  Add in the fact that it is family friendly and it gains even more footing.  There’s still more worth noting in the movie’s overall success, too.  Another factor to note in the movie’s success is its dubbing.

Audiences will note in watching Antboy that this movie is not originally American.  There are subtitles used in certain scenes.  That’s the first hint.  And watching the actors speak, audiences will note a discrepancy between the movement of the cast’s mouth movements and the actual words being heard.  At first one might think that it’s just a sync issue.  But a closer watch reveals that it’s actually dubbing.  This movie is Danish in origin.  So obviously the actors spoke in their native language.  To the credit of those charged with dubbing it into English, they did quite the impressive job of carrying out their duties.  As noted, the difference in the dubbing and original speaking parts is difficult to notice if one isn’t looking closely.  That is a tribute to the painstaking efforts of those responsible for translating the movie into English.  It’s yet another positive to a movie that while it will likely never be as big as its blockbuster counterparts, is just as good.

The translation of the original speaking parts from Danish to English was done with the utmost expertise. The same care as taken to separate Antboy from bigger name blockbusters. From making it family friendly to giving it its own identity, Cinedigm and all of the other companies responsible for bringing this story to American audiences are to be applauded for their efforts. There is still one more factor involved in this movie for which those companies deserve respect and applause. That final factor is the movie’s look. It was actually made to look like a comic book that had jumped right off the printed page. The animated panels and the movie’s very look together give this movie the truest feel of a real life comic book since 2002’s Sam Raimi helmed Spiderman ironically enough. That look combined with every factor previously noted becomes the final touch on this movie. It rounds out the entire presentation and makes it a movie that every family will enjoy even with just a single watch.

In the end, Antboy will never be as big as the films being churned out by Marvel and DC. But the reailty of the movie is that regardless of this, it is still a largely family friendly film. At the same time, it maintains its own place in the pantheon of superhero flicks. And in the arena of independently released superhero movies, it is one that any audience will appreciate whether it be in one watch or more.