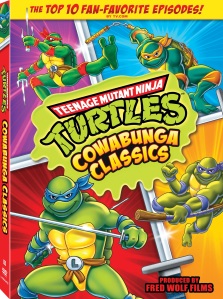 The episodes culled for Teenage Mutant Ninja Turtles: Cowabunga Classics collectively make up the primary reason that audiences will appreciate this latest release from Lionsgate and Fred Wolf Films. While not every season of the show’s ten total seasons is represented in this set, audiences that are familiar with the show will appreciate that the series’ first seven seasons are represented. And even on this presentation, each of the episodes included looks just as bright as they did in their original broadcasts. It all starts with Season 5’s “Planet of the Turtleoids” in which the guys are taken to a planet of nothing but turtles to help save some of its inhabitants. One of the best parts of the episode in whole is the turtleoid’s ship. It is shaped like a very familiar building. And then in “Night of the Rogues,” audiences are treated to a scenario very similar to that of both Marvel and DC. Leo, Raph, Donnie, and Mikey have to face Shredder’s “Rogue’s Gallery” of villains in his attempt to defeat them once and for all (yet again). Tempestra, The Rat King, Leatherhead, Scumbug, Antrax, Chrome Dome, and Slash are assembled in the series’ own version of Marvel’s Sinister Six or DC’s Legion of Doom. It all winds down with Season 1’s “Shreddered and Splintered.” This episode sees Splinter going after a retromutagen gun that could turn him back into a human. There’s just one problem—Krang and his new body.   It’s up to the guys to take him down and defeat both Krang and Shredder. These are just a few of the episodes that were collected for Cowabunga Classics. There are seven other episodes that span the series’ first seven seasons from which audiences will be able to choose their favorite(s) when they buy this DVD for themselves on July 29th.

The episodes that were collected for this latest compilation are the centerpiece in the DVD’s success and overall enjoyment. Audiences should also take into account with this DVD the bonus material chosen for the presentation. The bonus material collected for this DVD includes interviews with the men that original voiced the Teenage Mutant Ninja Turtles in “The Turtles: A Ninjatastic Look Back.” It also includes discussions with three of the artists that worked on TMNT over the course of its run. And it closes out with a special bonus presentation that focuses on the fans. That presentation in question was produced in 2009 for the series’ 25th Anniversary. It wasn’t included on the 3-movie DVD set, either. This critic could be wrong, but it might not have been included in the Blu-ray set, either. So that makes it even more of a welcome addition to this compilation. Much like Saban’sPower Rangers franchise is a worldwide phenomenon, so does this feature prove just how popular Teenage Mutant Ninja Turtles are to audiences even today. One of the most interesting sentiments echoed through this feature AND through the interviews with the original voices is of the show’s impact on people of all ages. It obviously is important for more than just being a show. The show’s cultural importance shines through each feature. Audiences will be moved as the original voices of the turtles discuss how moved fans were and are to this day by the series. There are stories of how it helped someone whose parents had gotten divorced at the time and of how it uplifted a young child and said child’s parents as the child sat in the hospital among so much more. It all goes to show the importance of this series to not just television history but to America as a people. That understanding makes the enjoyment of this DVD even more. And along with the episodes, it makes the DVD even more a must see for any true TMNT fans.

The bonus material included on Teenage Mutant Ninja Turtles: Cowabunga Classics is collectively an important addition to this DVD. It is just as important as the episodes chosen for inclusion on the DVD. Considering the breadth of material presented in this compilation, its $14.99 SRP is a rather reasonable price. Just because that is the suggested retail price (SRP) doesn’t even mean that it will be that expensive when it hits store shelves later this month. Odds are though, that it won’t be any more expensive than that SRP. Because it could actually retail for less depending on the store, that relatively inexpensive starting point is the finishing touch to this compilation. Together with the bonus features and the episodes chosen to be featured, all three of these factors make Teenage Mutant Ninja Turtles: Cowbunga Classics a must see and even a must have for any true-blooded fan of what is one of the greatest children’s series of the late 20th Century.