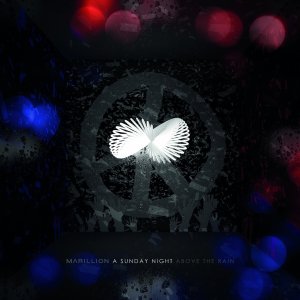 Marillion’s new live recording A Sunday Night Above the Rain was released in North America this week.  The double-disc recording is a piece that any fan of the veteran progressive rock band will want to add to their personal music library now that it is available to the masses.  The primary reason that audiences will want to add this new live recording to their personal music library is the band’s performance of its most recent album in its entirety along with a handful of other songs to complement the performance.  The second reason that Marillion’s fans will want to add this recording to their personal music libraries is its total run time.  Between its two discs, ASNATR offers audiences just over two hours of music.  The audio quality of those two-plus hours (technically two hours, two point four minutes) is expert.  All three factors together make Marillion’s new live recording well worth the money for any fan of this well-established band.

The central point of the success of A Sunday Night Above the Rain is the fact that the band’s set list in this show is comprised almost entirely of the band’s hit 2012 album Sounds That Can’t Be Made.  That album’s eight total tracks are spread across the record’s two discs.  They are accompanied by a handful of extremely rare songs from the band.  In the case of Marillion, the use of the term rare is not just thrown around.  Rather only perhaps two of those remaining five songs come directly from the band’s previous releases.  And those songs themselves have very rarely been performed live by Marillion.  The others are even rarer.  This makes the recording’s five remaining performances more than just part of the whole.  They become collectively a bonus in and of themselves.  Though, together with the other eight tracks from Sounds That Can’t Be Made, they become bonus material, too.  And that only serves to make this live recording even more enjoyable.

The songs included in Marillion’s set list are on the surface, great additions to the show.  On a deeper level, the very fact that the band would perform one of its albums in its entirety and do so for a live recording is even more important in itself.  That’s because while not entirely unheard of for a band to perform one of its albums in full, a band of such high regard doing so and for so many years as Marillion is less common.  It helps A Sunday Night Above the Rain stand out and establish its own identity even more.  That in turn makes this an even more special record for Marillion’s fans to add to their own home music libraries. All together, the performance of Sounds That Can’t Be Made alongside the rarer songs equals out to a performance time of just over two hours. To be more precise, it equals out to approximately two hours and two point four minutes. That is a lot of music for audiences to enjoy. And along with the last of this recording’s positives—the audio mix—those two factors and the set list together make ASNATR even more a great listen or Marillion’s fans.

The last factor worth noting in the release of ASNATR is the concert’s audio mix. Every concert venue around the world presents its own challenges when it comes to recording concerts.   Whether it be an American venue or one such as Center Parcs in Port Zealande, where this concert was recorded, balancing audio levels both for those in attendance and for potential home release takes painstaking and expert work. And that work paid off in the case of ASNATR. Neither front man Steve Hogarth’s vocals nor the music of his band mates covers the other at any point. Recording/Mix specialist Michael Hunter deserves his share of applause for maintaining that balance even in the recording’s softer moments. He shows that he can handle every moment from beginning to end. The end result is a recording that will allow listeners to capture so many nuances with each listen. The very fact that not every nuance can be caught in just one listen is in itself a testament to Hunter’s talents. Those talents are the finishing touch to a live recording that is one of this year’s best live CD recordings.