Inspector Lewis is back.  That’s right.  Everyone thought that the end of the road had come in the sixth season of the hit itv crime drama when Inspector Lewis called it a career.  Low and behold, he’s back.  And it wasn’t his own choice to return as audiences learn in the season premiere.  This fall, fans of the hit crime drama series will find out the circumstances of Inspector Lewis’ return when the series’ seventh season is released in whole.

Masterpiece Mystery!: Inspector Lewis 7 will be released Tuesday, November 25th on DVD and Blu-ray.  Kevin Whately and Laurence Fox both return to reprise their iconic roles as DI Robert Lewis and newly promoted Inspector James Hathaway in the show’s seventh season/series (different terms for the same thing depending on which side of the pond on which one lives).  Masterpiece Mystery!: Inspector Lewis 7 is comprised of three episodes, spanning a total of 270 minutes (or 4 ½ hours roughly).  The DVD will retail for MSRP of $29.99 and the Blu-ray for MSRP of $34.99.  It will also be available for digital download.   It can be ordered online direct from the PBS online store at: 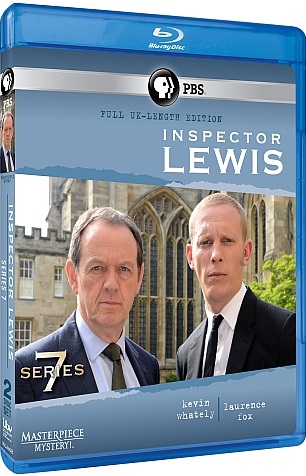 The episode listing for Masterpiece Mystery: Inspector Lewis 7 is included below complete with episode summaries.

Hathaway gets to work on his first case as an Inspector, with the help of his new partner, DS Lizzie Maddox. The crime is a complicated one that bridges the worlds of neurosurgery, blood sports and animal rights. Lewis, struggling to adapt to retired life, jumps at the chance to rejoin the force when Superintendent Innocent seeks his help. With Lewis back on the team, will they be able to solve the mystery?

“The Lions of Nemea”

After a difficult start, Lewis and Hathaway seem to have settled back into their former relationship, and Maddox has become integral to the team. Their abilities are tested as they investigate the brutal murder of Rose, an American Classics student. Suspicion immediately falls on a young professor who had recently broken off an affair with her, but as the detectives delve further into the case, they only find more secrets and murky motives.

“Beyond Good and Evil”

Thirteen years after Lewis’ first successful arrest as a Detective Inspector, the forensics have been called into question and the case re-opened for appeal. Lewis fears the worst – but nothing can prepare him for a new string of murders resembling the original murders with the original weapon. Did he arrest an innocent man? With Lewis’ reputation in jeopardy, Hathaway and Maddox race to catch the killer.