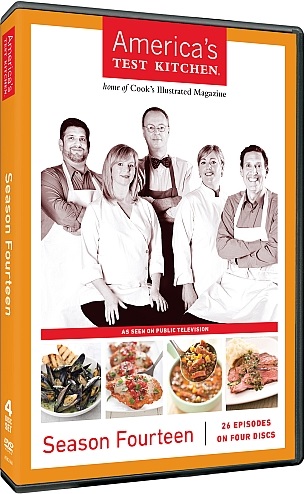 PBS released the fourteenth season of its hit cooking series America’s Test Kitchen to DVD this summer.  For those that might not be familiar with the long-running series, it is the on-air companion to Cook’s Illustrated Magazine.  It is also the only series on television today worth watching by anyone that has a love of food and the culinary arts.  In comparison to all of the celebrity-based cooking shows that pollute today’s television spectrum, America’s Test Kitchen has always focused on the food and not the familiar faces.  This latest release continues that long-held tradition from the hit series.  It’s just one reason that makes this season just as enjoyable as its previous thirteen seasons.  Another reason that audiences will enjoy this season is its list of dishes presented throughout the season’s episodes.  From fine dining to even the simplest dishes, host Christopher Kimball and company bring audiences lots and delectable dishes.  And instead of just saying do this or that, they actually discuss how each dish is made.  They even add educational content, explaining the significance of the processes and ingredients in each dish.  For those wanting to try the dishes out for themselves, a number of printable recipes have been included as PDF files complete with fully outlined directions, ingredients and a picture of the finished product.  That bonus rounds out the box set, completing what is even more proof of why PBS truly is the last bastion of worthwhile programming on television.

America’s Test Kitchen has proven for years to be in this critic’s view the single greatest cooking series on television.  The only real contender to that title is its “sister series” Cook’s Country.  It just so happens that Cook’s Country is hosted by Christopher Kimball, who also hosts America’s Test Kitchen.  And go figure, both series are run by PBS, which is really the last true bastion of worthwhile programming on television.  Anyone that might not be familiar with America’s Test Kitchen will see instantly in the DVD release of the series’ fourteenth season why it has remained a hit for such a long time.  The central reason for its continued success fourteen seasons in is the fact that it is not celebrity driven.  That goes completely against the standard used on the shows that make up most of Food Network’s programming and that of the cooking shows on Fox, NBC, and ABC.  It actually makes the food the star, not the people.  It’s such a welcome change in comparison to those other shows.

The downplaying of the host as the star of the show is the cornerstone of what has made America’s Test Kitchen a hit among true foodies and lovers of the culinary arts for fourteen seasons now.  Audiences will appreciate that unlike all those commercially-based cooking shows, the food and cooking equipment are the stars, not the hosts.  Just as worth noting is the variety of dishes that are presented and the manner in which they are presented.  Unlike all of the commercially-based cooking shows, Kimball and company don’t just say “this is what you do”, flying through each dish along the way.  Rather, they take their time.  They explain the significance of the ingredients and the processes that the dishes undergo as each ingredient is added to the various dishes.  That extra educational content shows the importance of cooking not just as some random activity but a science of sorts.  There are so many chemical reactions that go on in preparing and cooking different dishes.  It is really something interesting to consider.  Speaking of the dishes in question, the dishes featured this season range from something one might see on the menu at a four-star restaurant to an update on something as classic and simple as a grilled cheese sandwich.  There is even an easy meals made with pasta, seafood, and corn (yes, corn).  And what’s more audiences can pick and choose which dishes to check out.  They don’t have to sit through episode after episode to get to their dish of interest.  That makes the whole experience even better for any foodie and lover of the culinary arts when watching Season 14 of America’s Test Kitchen.  The positives don’t end here, either.  PBS has once again included a number of printable recipes to complement the dishes presented in Season 14. That inclusion rounds out the set, proving once more why this is the only cooking show worth watching on television today and why PBS is the last bastion of truly worthwhile programming on television today, too.

America’s Test Kitchen: Season 14 brings with it every one of the traditions that have made it a hit with viewers ever since its premiere season.  It includes once again explanations of each dish’s ingredients and the processes that occur in prep and cooking.  This proves that cooking isn’t just cooking.  It proves cooking is a science of sorts.  This is something that no commercially-based cooking show does.  It also makes the food and the cooking equipment the star, not the show’s hosts.  This has been a tradition since the show’s beginning so many years ago, too.  One more tradition that is carried into this season is the inclusion of printable recipes lifted right from the season’s episodes.  Obviously not every dish could receive its own printable recipe.  Sure it would nice to have the recipe for every single dish presented throughout each season.  But that just isn’t possible.  However, the dishes presented in this season’s selection of printable recipes  is delectable in its own right.  There’s a recipe for grilled corn with basil and lemon butter complete with recipe for the basil and lemon butter baste.  For those looking for something *ahem* meatier, there are recipes for grilled chicken, baby back ribs, and even grilled glazed pork loin.  Those viewers with a bit of a sweet tooth will enjoy the recipes for peach pie, lemon chiffon pie, and marbled blueberry bundt cake among other dishes.  There are plenty of other recipes included on the set that audiences will find their own favorite from the extensive selection offered.  That diverse selection perfectly rounds out the set and is sure to leave any viewer’s mouth watering in anticipation of trying these dishes themselves.  It proves once more why even now in its fourteenth season, America’s Test Kitchen remains the only cooking show worth watching on television and why PBS in whole is the last bastion of true worthwhile programming on television.

There is so much that can be noted of America’s Test Kitchen that makes it so enjoyable even now in its fourteenth season.  From the printable recipes to its in-depth episodes to the very fact that it continues to focus on the food and not the hosts, it continues to do so much right.  Any lover of the culinary arts and any foodie that has yet to see why this show continues to be so successful should order this four-disc box set now.  After watching through it, those viewers will join the ranks of those (like this critic) that already know why it is indeed the best cooking show on television today.  It is available now and can be ordered direct online via PBS’ online store at http://www.shoppbs.org/product/index.jsp?productId=35446656&cp=&sr=1&kw=americas+test+kitchen&origkw=America%27s+Test+Kitchen&parentPage=search.  More information on America’s Test Kitchen is available online at: