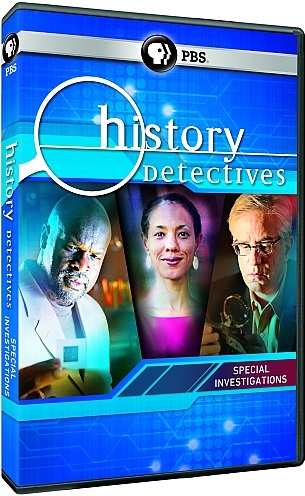 PBS has proven time and again in recent years that it is the last bastion of truly worthwhile educational programming.  While History Channel, Discovery Channel, and others of their ilk have continued to fall victim to their heads’ lust for reality TV programming, PBS has held its guns and stood its ground, becoming the gold standard for educational programming.  One show that has helped to make PBS the gold standard is its fan favorite series History Detectives.  PBS recently released a new History Detectives special to DVD titled History Detectives: Special Investigations.  Not that PBS needs it at this point, but this DVD is more proof of why the series is such a fan favorite and why PBS continues to help make PBS the leader in quality educational programming.  Audiences, whether they be new to the series or are more familiar with it, will appreciate that the series delves into some of history’s greatest mysteries in this new special.  That’s a change from its normal format.  Those that are less familiar with History Detectives will appreciate that it uses a rather familiar format in investigating each of the special’s mysteries.  And last but hardly least of all, in none of the cases studied in this special does the team try to prove or disprove any theory set forth.  The team merely investigates the facts and leaves the rest up to viewers.  When audiences take into consideration all three of the factors noted here, they will agree that this DVD proves once more why History Detectives is one of the best series on television for educators and lovers of history, and why PBS remains today the gold standard in quality educational programming.

History Detectives is one of PBS’ best programs.  It is a favorite among educators and lovers of history.  The main reason for this is that it presents history at its purest.  It has never attempted to over-glorify history and make it sexy for the sake of eyeballs to put it bluntly.  It takes the road far less traveled today in comparison to programs on the likes of History, Discovery, Destination America and others under those corporate umbrellas.  This latest release from History Detectives proves why that approach has–and continues to–make it a fan favorite.  Normally, History Detectives focuses on the history behind items and documents owned by ordinary people.  This time though, it turns the focus to a pair of history’s greatest mysteries and a couple that while not as well-known are just as interesting.  The two more well-known of the mysteries presented here center on famed band leader Glenn Miller and Jimmy Hoffa.  The lesser known of the mysteries presented here focus on the river boat Sultana and on a group of servant girls from Texas.  The study on Glenn Miller is exactly what audiences expect.  It examines the possible fate of the famed band leader.  The findings from the study are pretty interesting to say the least.  That’s because they leave just as many questions as answers.  Unlike the study on Miller, the study on Hoffa isn’t what audiences might think.  Instead of focusing on his fate–as so many do–this episode focuses on who might have been responsible for his disappearance.  The findings here are just as eye opening as the theories concerning where he may be.  Some may be surprised to learn that apparently Hoffa even had a link to none other than President Richard Nixon.  That’s just one of many rather interesting facts that audiences will learn from this episode. As if this isn’t enough, the episode centering on the riverboat Sultana brings up thoughts of the Maine and its controversy.  It might event raise thoughts of the Titanic disaster.  And the story centering on the murders of the young Teas servant girls will engage audiences just as much.  As should be evident by now, these stories by themselves more than make History Detectives: Special Investigations worth the watch by any educator or history lover in general.

The stories that make up History Detectives: Special Investigations are by themselves more than enough reason for audiences to check out this new DVD.  The manner in which the team approaches each investigation is another reason that audiences will appreciate this special.  Whether or not they are familiar with this series, audiences will recognize the manner in which the team approaches each case.  It is a formula that was once used in Discovery’s Mythbusters before the team of Kari, Grant and Tory was let go.  The only difference is that unlike Mythbusters, the show’s heads and hosts don’t try to make the investigations sexy for the sake of eyeballs.  It’s a welcome breath of fresh air.  It proves that history doesn’t have to be sexy to be interesting.  It’s just one more way that this latest release from PBS and History Detectives prove the value of both collectively.

The cases presented here and the manner in which each one is investigated together make History Detectives: Special Investigations solid proof of why this series is so belived by fans and why it makes PBS so invaluable to audiences today.  While both of the factors noted here play their own important role to the enjoyment of this presentation, there is one more aspect of this DVD that makes it so enjoyable for audiences.  That last aspect is the fact that within the course of the investigations, at no point does the team of Wes Cowan, Kaiama Glover, and Tukufu Zuberi try to prove or disprove any of the theories around which each case centers.  Rather they merely investigate each case, presenting the facts as they find them.  The rest is left up to audiences to decide for themselves.  In the case of Glenn Miller’s disappearance, audiences are left with a strong probability in terms of what might have actually happened.  But because his body was never recovered, audiences are still left to decide for themselves if the facts gathered actually lead to anything solid.  And in the case of Hoffa’s disappearance, audiences are left just as much to decide for themselves if the mob actually played a role in his disappearance or if in fact Nixon himself might have played a role.  The team never tries to actually say yeah or nay in the end.  They just gather the information needed to make educated guesses in each case.  Such approach serves to make each case all the more enthralling that each already was to begin with.  The end result is a special that leaves audiences wanting History Detectives to investigate some of history’s other major mysteries between its regular investgations.

Next to PBS’ History Detectives, the only other history based series on television today that present any real value anymore are Travel Channel’s Mysteries at the Museum and History’s American Pickers.  While both series offer their own value to audiences, History Detectives still comes in first.  Special Investigations is more proof of that.  The cases and the team’s approach to each case more than make this series a joy for viewers.  The fact that it never really sets out to prove or disprove any theory, but rather simply investigates each one makes these episodes even more enthralling.  Altogether, all three factors together make this collection of investigations one that every educator and lover of history should have in their own personal collection.  It is available now on DVD and can be ordered direct from PBS’ online store at http://www.shoppbs.org/product/index.jsp?productId=38349276&cp=&sr=1&kw=history+detectives+special+investigations&origkw=History+Detectives+Special+Investigations&parentPage=search.  More information on this release and all of the latest news from History Detectives is available online at: