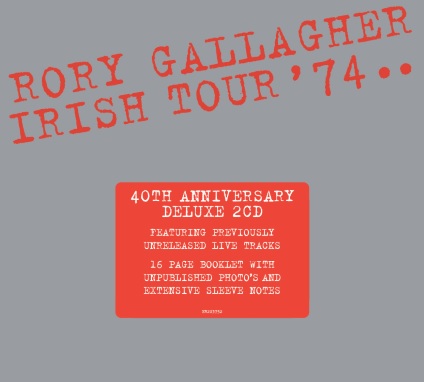 Rory Gallagher is probably not the first name that most people would come up with when they are asked to name some of the most well-known guitarists in music’s modern history. While he may not be one of the most well-known musicians to have ever picked up a guitar, the artists with whom he recorded and performed in his short career are legendary. Muddy Waters and Jerry Lee Lewis were just a couple of acts that he recorded with during his career. He also performed and recorded with former members of the famed Yardbirds after that band’s initial disbanding. And that is just a small sampling of his achievements from his career. Now thanks to Eagle Rock Entertainment, a whole new generation of rock purists is being introduced to Gallagher’s talents thanks to the recent release of his Irish Tour ’74 archived live recording. The archived concert was released in a special deluxe 2-CD edition on October 21st. And it goes without saying that there is a lot to like about this recording especially for those that might not be so familiar with Gallagher and his body of work. The most obvious thing to like about the recording is the recording’s set list. The special double-disc CD set focuses primarily on Gallagher’s shows from Cork, Ireland on January 5th, 1974. It is a great piece of music history especially for those that aren’t so familiar with Gallagher and his body of work. The concert’s audio mix in this presentation is another aspect that audiences will like. Four decades have passed since the shows from Gallagher’s ’74 tour. And the audio has stood the test of time quite well, as audiences will note here. Rounding out the package is its companion booklet. The companion booklet comes with never before published pictures and new liner notes. Each factor noted here makes Irish Tour ’74 enjoyable in its own right. Together, they make this recording a welcome and important piece of music history.

Irish-born blues-rock guitarist Rory Gallagher was one of the most well-kept secrets in the music industry during the course of his short life. He recorded roughly twelve studio albums over the course of his career. Those albums have sold well over thirty million copies worldwide. For such impressive numbers, Gallagher never gained the international super stardom of his British and American counterparts at the time. But as audiences will hear in the set list contained on Eagle Rock’s double-disc release Irish Tour ’74 Gallagher was and still is deserving of far more credit and acclaim than he has ever received. The blues rock sounds presented in the show’s set list echo hints of Led Zeppelin, The Allman Brothers Band, The Doobie Brothers, and so many other great names within rock’s blues-based sub-genre. One could even argue that there are hints of Jimi Hendrix in his playing. That is evident right off the top in his performance of ‘Messin’ With The Kid.’ Audiences can hear both Hendrix and Led Zeppelin guitarist Jimmy Page in this song. Lou Martin’s frantic work on the keyboards and Rod De’ath’s drumming set against Gallagher’s guitar playing make this song an explosive opener and an equally explosive first impression for those that are hearing Gallagher’s music for the first time. Audiences will also appreciate the comparison to George Thorogood (and to a lesser extent Lynyrd Skynrd) that can be made in ‘Hands Off.’ The song’s straight forward 4/4 blues-rock vibe will have any listener jamming out regardless of their familiarity with Gallagher’s music. The mini-tribute to the Andrews Sisters in the opening of ‘Who’s That Coming’ is by itself a great touch. The song’s simple stylistic comparison to The Allman Brothers Band and even The Doors makes the song even more enjoyable for audiences. Yes, one could even make a comparison between Gallagher and The Doors. That says quite a bit about Gallagher’s talents. Listening to the rest of the songs that make up this two-disc recording, audiences will find other comparisons. In making such comparisons, it reveals even more Gallagher’s level of talent. One can only hope that the end result will be a resurgence in the popularity of his music.

The set list that makes up Irish Tour ’74 presents Gallagher as a truly talented musician. The same can be said of his band mates in these concerts. It makes one wonder why he never gained the level of fame as his counterparts despite his albums selling some thirty million copies worldwide. Perhaps this recording will help push him to that stratosphere on which his counterparts in question rest to this day. The set list itself more than makes this recording a great re-introduction to Gallagher’s works. Without a solid audio mix the recording would be nothing. Luckily though, the tapes on which these shows were originally recorded have stood the test of time quite well. The audio levels are expertly balanced in their re-mastering. The end result there is that no one part overpowers the other at any one point throughout the course of the recording. Yet again, it is proof of why Eagle Rock Entertainment remains to this day the leader in live recordings. Whether the recording be from a world renowned superstar or someone lesser known such as Gallagher, Eagle Rock Entertainment releases only the best possible recordings. It does not release recordings with inferior production values. Such expertly handled production values will make taking in Gallagher’s music all the more enjoyable and play even more of a role in re-igniting his fame.

The production values of Irish Tour ’74 and the recording’s set list are both key to the overall success of this latest archived concert. The two elements together make this recording an excellent way to re-introduce Rory Gallagher to the world. The recording is rounded out with the inclusion of a companion booklet loaded with extras. The companion booklet boasts sixteen pages of previously unpublished photos from Gallagher’s Irish tour and new liner notes outlining the tour’s highlights. Among the most interesting of the liner notes are notes concerning his performance in the worn torn region of Belfast. There are notes about his impact on that region and his influence as a musician overall during his career and much more included in the liner notes. It is one more important piece of the whole that makes Irish Tour ’74 such a wonderful re-introduction for Gallagher to the world. Together with the show’s set list and its exception production values, it becomes all the more valuable for any rock and roll purist and fan of classic rock. It becomes a recording that regardless of one’s familiarity with Gallagher and his body of work, any rock purist will enjoy. It could even lead said purists to become new fans or new fans again of Rory Gallagher.

Irish Tour ’74 is available now in stores and online. Along with its double-disc CD presentation, it is also available as a special eight-disc box set containing all four of Gallagher’s performances on his 1974 tour of Ireland and even more bonuses and even a triple gate fold vinyl for all the vintage rock fans. The triple gate fold vinyl re-issue can be ordered online at http://www.recordstore.co.uk/recordstore/recordstore/Irish-Tour-74-Expanded/3JHU0000000. More information on this and other releases from Rory Gallagher, as well as the latest news from Rory Gallagher, is available online at: