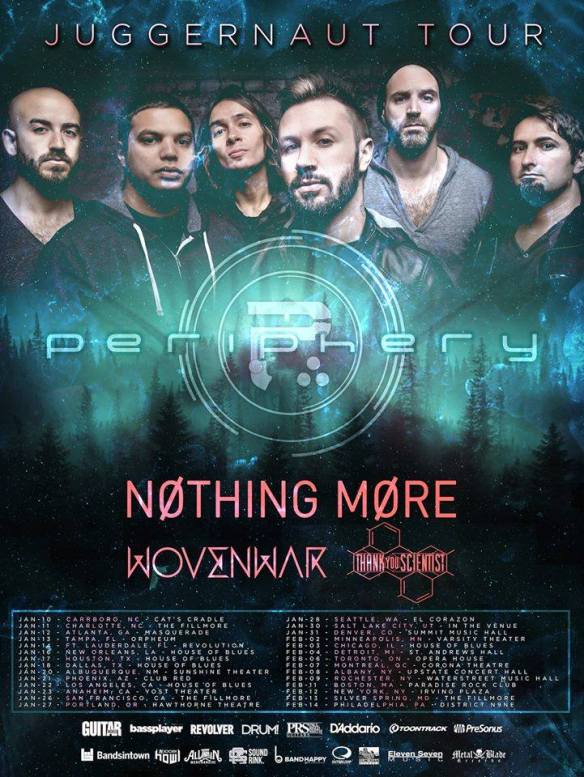 Up-and-coming hard rock four-piece Nothing More will kick off the new year with a pair of performances in North Carolina.

Nothing More will open 2015 with a live performance Saturday, January 10th at Cat’s Cradle in Carrboro, North Carolina. The band, which is touring in support of its self-titled debut album, is serving as a support act to Periphery on that band’s 2015 “Juggernaut Tour.” It is joined by fellow support acts Wovenwar and Thank You Scientist.   Tickets for the bands’ show at Cat’s Cradle are $18 to $22.  Tickets are available online at http://www.ticketfly.com/purchase/event/717347?utm_medium=459899.  Doors open at 6pm with the show starting at 6:30pm.

After the bands’ show at the Cat’s Cradle, they will head on to Charlotte, North Carolina, where they will perform the next day, Sunday, January 11th at the city’s famed Fillmore. Those looking to attend the bands’ performance at The Fillmore can purchase tickets online via LiveNation at http://concerts.livenation.com/event/0E004D5ECA765781?dma_id=289&wt.mc_id=aff_BUYAT_97249&camefrom=CFC_BUYAT_97249&REFERRAL_ID=tmfeedbuyat97249.  Tickets start at $27 each.  Doors open at 7pm.

Nothing More recently released the second single from its self-titled debut ‘Mr. MTV.’ That single is currently in the Top 25 after having been out only a short time. It is a protest against the image being presented to today’s society concerning how people should look and act in order to be accepted and popular. The song’s companion video can be viewed online now via the band’s website. ‘This Is The Time (Ballst),’ the band’s debut single, grabbed the top spot on many rock charts for three weeks. More information on Nothing More including all of the band’s latest tour updates and news, is available online at: