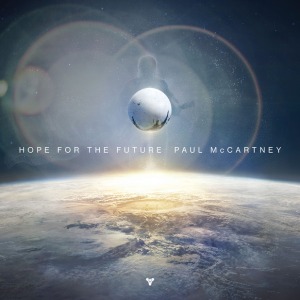 Legendary musician Paul McCartney has spent the better part of his life making some of the greatest music that audiences have ever heard. Whether it be music that he crafted with his former Beatles band mates, those he composed as part of Wings, or his solo work, McCartney’s work has proven time and again to be timeless. Now McCartney is set to release yet another great work in the form of his new single ‘Hope For The Future.’ This song was previously only available through the new hit video game Destiny. But on Monday, December 8th, the song will be available worldwide for audiences via Concord Music Group/Hear Music/MPL. There is plenty that can be said of this song that makes it such a joy of a song. The most obvious reason for its enjoyment is its lyrical content. Taken out of the context of Destiny’s world, the song’s lyrical content proves to be just as powerful for listeners. The song’s musical arrangement adds even more depth to the song. There are strings, horns, and of course McCartney covering the vocals and guitar line. As important as both factors are to the song’s success and enjoyment, they would be nothing without proper production. Thankfully veteran producer Giles Martin put all of the song’s various musical sections together to complete the song. It shows to be a song that gives its own hope for the future of McCartney’s career however long McCartney chooses to keep making music.

‘Hope For The Future’ was originally released earlier this year as part of the soundtrack to the hugely popular video game Destiny. But next Tuesday, the song will be available for audiences around the world through Concord Music/Hear Music/MPL. This song, which McCartney crafted himself, is arguably one of the best new singles of 2014. And it definitely gives its own * ahem* hope for the future of McCartney’s career for however long he chooses to keep making music. One way in which that it does this is through the song’s lyrical content. McCartney writes in this song, “We will build bridges/Up to the sky/Heavenly light surrounding you and I/From out of the darkness/Our future will come/If we leave the past behind/We’ll fly beyond the sun/We’ll be together/Sharing the load/Watching in wonder/As our lives unfold.” Such positive lyrical content could not be more welcome especially in consideration of all of the conflict around the world. McCartney’s line referencing leaving the past behind could not be more fitting for America considering the recent reports of civil unrest and racial tensions raised thanks to recent police actions. He goes on to write in the song’s chorus, “Hope shines brightest/In the dark/Where nothing’s ever seen/Lighting undiscovered places/No one’s ever been.” He hammers home the point that a positive outcome is possible despite all of this unrest and tensions he writes, “Hope for the future/It will belong to us/If we believe/If we believe.” Such positive and–for lack of better wording–hopeful lyrics are welcome and much needed especially in the current state of the world. It’s just one way in which ‘Hope For The Future’ proves to be such an outstanding new work from Paul McCartney.

The lyrical content infused into ‘Hope For The Future’ is itself an important part of the song’s whole. It provides a positive, glimmering light among all of the darkness created by the conflict and tensions around the world. The lyrics are themselves quite positive. The music against which the lyrics are set add even more depth and impact to the song. McCartney was backed by a full orchestra in the recording of the song. That means that every part that audiences hear is the real thing. From the gentle cello line that opens the song to the power of the low brass against McCartney’s own guitar line, and the soaring strings, the arrangement in whole adds so much depth and emotion to the song. Set against the song’s lyrical side, it makes them even more impactful. The end result is again, a song that proves to be one of this year’s best new singles and a song that gives plenty of hope for McCartney’s own musical future.

The music and lyrics that make up ‘Hope For The Future’ collectively make this song a piece that audiences will enjoy whether listening to it as part of Destiny’s soundtrack or by itself. As impressive as the music and lyrics are, they would be nothing without the work of producers Mark “Spike” Stent and Giles Martin. Martin, many might not know, is the son of legendary producer George Martin, who produced a number of The Beatles’ greatest albums decades ago. George’s ear for music was obviously passed down to Giles, as audiences will hear here. He and Stent balanced McCartney’s musicianship with the talents of the 120-member (yes, 120) orchestra. Whether it be the accents of the cymbal rolls, the punch of the low brass against McCartney’s own guitar line, or the crescendos and decrescendos of the strings, Martin and Stent obviously went to painstaking efforts to make every part of the song have the utmost emotional impact. They accomplished this goal quite well, too. Audiences will agree with that sentiment when they hear the song for themselves. What’s more, audiences will agree in hearing ‘Hope For The Future’ that this song itself is one of the best new singles of 2014. And it gives great hope for McCartney’s career for however long he intends to keep making music.

Whether it be for the production work of Giles Martin and Mark Stent, the song’s musical side, or its lyrical side, all three factors prove to be equally important in the success and enjoyment of ‘Hope For The Future.’ The original mix itself is more than enough reason to pick up this single or download it. McCartney and the people at Concord Music, Hear Music, and MPL have made things even more interesting for audiences by including four remixes, one of which is a rather interesting EDM remix. Whether it be any of those remixes or the original, every listener will find something to like about ‘Hope For The Future.’ With any luck, all of the different mixes together will change the minds of even those that have decried the song and make them agree that this is without a doubt, one of the great new singles of 2014.

‘Hope For The Future’ will be available Monday, December 8th. More information on how to purchase and download the single and on McCartney’s upcoming tour dates and news, is available online at: