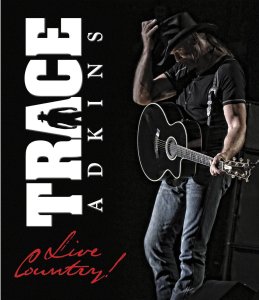 Eagle Rock Entertainment released country music star Trace Adkins’ new live recording Live Country this week. Being that Adkins is one of the leading names in the world of country music and that Eagle Rock Entertainment is the leading name in live recordings, it only made sense for the pair to partner for Adkins’ new live recording. Live Country is one more notch in Eagle Rock Entertainment’s proverbial belt, showing yet again why it maintains the mantle of the leading name in live recordings. It also exhibits why Adkins is one of the leading names in country music today. The main reason for this is the concert’s extensive set list. The twenty-song, ninety-minute concert covers a relatively large swath of Adkins’ career at least up to this point. The band’s stage presence adds even more enjoyment to the concert. There is a certain unassuming nature about Adkins and his band mates throughout the concert that actually makes the show all the more enjoyable. They let the music do the talking for them, thus adding more substance to the show interestingly enough. Last of note that makes Live Country so enjoyable for Adkins’ fans is Adkins’ interview added as a bonus. It goes without saying that this recording being an Eagle Rock release, the audio and video are of the best possible quality. So there is no reason to bring that up again and again. That is just an understood constant. Thus the focus on the bonus interview. The interview runs just under the half hour mark. Adkins discusses his rise to fame in his interview, hearing himself for the first time on the radio, his uneasiness at performing a certain song in his hometown in front of his mother, and much more during the course of that time. Long-time fans will find plenty of enlightening discussion and even some entertaining moments, too. Whether it be for those discussions or discussions on other topics, the collective body of Adkins’ interview fully lives up to its title of a bonus. And together with the noted elements of the concert recording itself, all three elements together make Live Country a recording that any of Trace Adkins’ fans will enjoy.

Typically when one thinks of Louisiana, one doesn’t normally associate the boot-shaped Gulf Coast state with country music. More often, it is associated with zydeco and the blues. It is associated with the NFL’s Saints. And most of all, it is associated with one of America’s biggest annual parties, Mardi Gras. So when Louisiana native Trace Adkins first broke out in 1996 with his debut album Dreamin’ Out Loud, it came as a bit of a surprise to a lot of people. Fast forward nearly two decades and more than a dozen albums later, and Trace Adkins has more than proven that his rise from the tiny town of Serepta was anything but a fluke. Audiences will see and hear that for themselves when they pick up Live Country for themselves thanks to the show’s set list. The show’s set list is in fact the center point of the recording’s enjoyment. Adkins takes audiences all the way back to his debut album in this recording as he included ‘I Left Something Turned on at Home,’ ‘There’s a Girl in Texas,’ and ‘This Ain’t No Love Song.’ He also included in the concert’s set list ‘This Ain’t Not Thinkin’ Thing’ as the concert’s opening number. His 1997 album Big Time is represented with its title track. All of his albums from the early 2000s are represented throughout the concert as is his 2010 album Cowboy’s Back in Town. Obviously Adkins wasn’t able to pull music from every one of his albums. Otherwise the concert would have been much longer. Maybe those albums not represented here will be saved for Adkins’ next live recording. Regardless, the fact that so much of Adkins’ body of work is represented here justifies the use of the term career-defining for the performance. Far too often that term is tossed around for performers’ concerts and far too little do said performances live up to said mantle. In this case, the concert’s set list definitely does live up to the term, proving without a shadow of a doubt why its set list sits solidly as the center of Live Country’s enjoyment.

The set list that makes up Live Country more than lives up to the mantle of being career-defining. That is because it covers nearly every one of the albums that comprise Adkins’ body of work. Those songs are collectively more than enough reason for Adkins’ fans to add Live Country to their personal collections regardles of whether or not they already have his previously released live recordings in their libraries. As important as the show’s set list proves to be to this recording’s enjoyment, the band’s stage presence proves to be just as important. There are no over the top antics, no big showy moves or anything else. Rather, Adkins and his band mates–John Coleman (keyboards, vocals), Brian Wooten (guitar), Mark Gillespie (guitar, vocals), Wayne Addleman (steel, dobro, guitar, vocals), Mike Brignardello (bass, vocals), and Johnny Richardson (drums)–maintain a certain almost unassuming demeanor throughout the concert. They make the music the star of the show instead of themselves. The same can be said of backing vocalists Kate Rapier and Jill Pickering. That unassuming demeanor and focus on the music actually adds a certain depth and substance to the concert. It shows that a concert can be enjoyable with little more than a bare bones approach. That simplistic yet so smart approach coupled with the show’s set list makes for even more reason for Adkins’ fans to add Live Country to their personal collection. What’s more it proves even more so both why Eagle Rock Entertainment remains the leader in live recordings and Trace Adkins one of the leading names in country music.

Both the songs that make up Live Country’s set list and the stage presence of Adkins and his band mates through the course of the concert play important roles in the enjoyment of this recording. They are in fact the most important aspects of the concert that make it so watchable and enjoyable. It goes without saying that being an Eagle Rock Entertainment release, the concert’s audio and video mix are of the highest quality. So making note of those high quality production values yet again would be redundant from this critic. That being the case, the reasons for Live Country’s enjoyment are rounded out by the bonus interview with Trace Adkins himself. Adkins sat down with a member of the media before the concert to discuss a number of topics for the interview. Those topics included hearing himself on the radio for the first time early in his career, performing in front of his mother, his rise to fame, and much more throughout the course of the interview. His rather matter-of-fact demeanor throughout the interview is interesting to say the least. When he talks about hearing himself on the radio for the first time, there is no feeling of shock. It’s obvious he is recalling the memory. But he is just as unassuming here as on stage. He maintains that approach throughout the rest of the interview, too. It shows someone that obviously hasn’t let celebrity go to his head, even being the first ever winner of NBC’s Celebrity Apprentice. It’s just one more reason that any Trace Adkins fan will want to add this recording to their personal collection now that it is available in stores and online. It is also another way in which both Eagle Rock Entertainment and Trace Adkins prove again to be leaders in their respective fields.

Live Country is not Trace Adkins’ first ever live recording. However, it is a fine example of why he is one of the leading names in country music. It is just as fine an example of why Eagle Rock Entertainment remains today the leader in live recordings. The show’s extensive set list and the band’s on-stage presence collectively make this concert just as enjoyable as any of Adkins’ previously released recordings. The companion interview with Adkins that is included with the concert adds even more enjoyment for fans. That is thanks both to the interview itself and his humble approach to the interview. All three aspects by themselves make for plenty of enjoyment in Live Country. Collectively, they make Live Country another big win both for Eagle Rock Entertainment and for Adkins himself. Together, they show why both parties remain today leaders in their respective fields. Live Country is available now in stores and online. More information on this and other releases from Eagle Rock Entertainment is available online at: