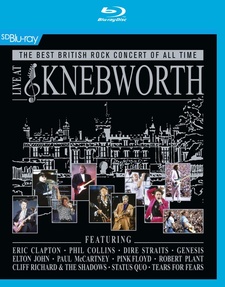 Eagle Rock Entertainment will release what is one of its biggest recordings to date this spring when it releases on SD Blu-ray Live at Knebworth.

Billed as “The Best British Concert Of All Time,” Live at Knebworth will be released Tuesday, March 17th on SD Blu-ray. It is presented in upscaled standard definition with uncompressed stereo and DTS-HD Master Audio. The concert was originally recorded on June 30th, 1990. It was held as a benefit concert for Nordoff-Robbins Music Therapy and The Brit School for Performing Arts. Its lineup included some of the most well-known and respected musicians and acts from the UK. Many if not all of the acts in question had each themselves received the Nordoff-Robbins Silver Clef Award. They included: Eric Clapton, Paul McCartney, Pink Floyd, Robert Plant, Elton John, Phil Collins, Genesis, Dire Straits, Tears for Fears, Cliff Richards and the Shadows, and Status Quo. Most incredible of all was that of these performers, each one performed free of charge to support the cause.

McCartney offered up renditions of ‘Hey Jude,’ ‘Birthday,’ and ‘Can’t Buy Me Love’ for his performance. When Clapton took to the stage, he gave audiences ‘Tearin’ Us Apart’ and ‘before You Accuse Me.’ Elton John moved audiences in his own way with performances of ‘Sad Songs (Say So Much’ and ‘Sacrifice.’ Genesis gave one of the most interesting performances of the concert with a medley of ‘Somebody to Love,’ ‘Pinball Wizard,’ and ‘Turn It On Again.’ Robert Plant was joined on-stage by his Led Zeppelin band mate Jimmy Page for performances of ‘Wearin’ and Tearin,’ and ‘Rock and Roll.’ Pink Floyd’s performances of ‘Shine On You Crazy Diamond’ and ‘Run Like Hell’ were some of the concert’s most memorable moments. And they were just some of the key moments that make up the concert’s thirty-two song concert. The concert’s complete track listing is noted below.

3) Everybody Wants To Rule The World

7) In The Air Tonight

14) Rockin’ All Over The World

17) Before You Accuse Me

26) Wearing And Tearing (with Jimmy Page)

29) Throwing It All Away

31) Shine On You Crazy Diamond

Proceeds from the sale of Live at Knebworth will continue to raise funds for Nordoff-Robbins Therapy and the Brit School for Performing Arts. More information on this and other releases from Eagle Rock Entertainment is available online at: