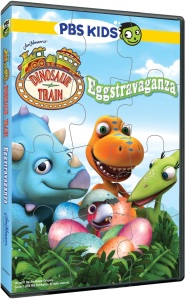 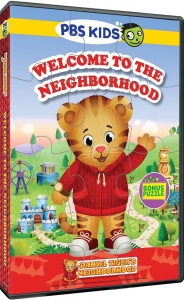 PBS Distribution recently re-issued a trio of DVDs from three of PBS Kids’ family favorite series. The DVDs—Dinosaur Train: Eggstravaganza, Daniel Tiger’s Neighborhood: Welcome To The Neighborhood, and Caillou: Caillou’s Garden Adventures—were all released Tuesday, January 13th. Now thanks to Phil’s Picks, five lucky families out there will each receive not one, not two, but all three of the DVDs in question. All five winners of these prize packs will be announced Friday, January 30th and will be mailed out to the winning families soon after. Winners will be announced that afternoon at 5pm ET.

Each of the DVDs are presented as in their original releases complete with episode listing and printable coloring pages and activities. What’s different with them this time around is that each DVD comes with its own detachable jigsaw puzzle for young viewers to take apart and re-assemble. It’s a great way to pass some time and build problem solving skills. Children can assemble it themselves or with their parents. The puzzles are covered with a sticker-type backing that is easily removed. And that backing

has a couple touches of rubber cement to attach the assembled puzzle to the case itself. This makes it simple to remove the puzzle both from its backing and from the case. It should be noted that parents should keep the puzzle pieces in bags or other containers so as to not lose them. That’s because it is very easy to lose them being that there are so few pieces.

Any interested families and entrants can get their name into the drawing for these prize packs simply by going to the Phil’s Picks Facebook page at http://www.facebook.com/philspicks and hitting the “Like” button. Once that’s done, all that’s left is to write on the timeline there, letting me know that they want to be entered for a shot at the PBS Kids’ DVD prize pack. It’s that simple. Again, the winning names will be drawn January 30th at 5pm ET. It’s that easy. So spread the word and good luck. And to keep up with all of the latest sports and entertainment news and reviews, go online to http://www.facebook.com/philspicks and “Like” it. Fans can always keep up with the latest sports and entertainment news and reviews in the Phil’s Picks blog at https://philspicks.wordpress.com.