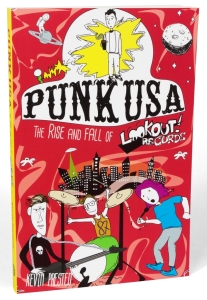 Lookout Records is known to many music industry insiders and fans alike as being one of the most important and influential record labels in the rock world. The company, which focuses mainly on the world of punk rock, was founded almost thirty years ago by Lawrence Livermore as a means to support his band The Lookouts. Thus the name Lookout Records. During the course of the label’s life, it became home to some of the biggest names in the punk world. It’s the label that gave Green Day its first chance. It was also home at one point to fellow punk stalwarts Operation Ivy and Crimpshrine just to name a couple more. For all of its successes early on, there were also a lot of bad business decisions that would go on to lead to the label’s demise. Now thanks to music journalist Kevin Prested, audiences finally get a glimpse into how those decisions led to Lookout’s downfall and the early decisions that led the label to be one of the biggest in the world of punk in his new book Punk USA: The Rise and Fall of Lookout Records.