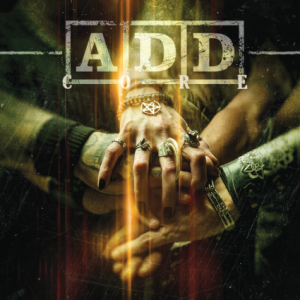 Chicago-based hard rock band A.D.D. (Analog Digital Disorder) recently signed a new deal with independent record label Pavement Entertainment that will see the band release its second full-length record through the label. Core will be released next Tuesday, March 24th. And for anyone that is a fan of Godsmack, Sevendust, and others of that ilk, this twelve-track album is right up said listeners’ alley. Speaking of Sevendust, the band’s cover of Sevendust’s ‘Black’ anchors this latest release. It is a near spot on take on what remains today one of the favorites of Sevendust’s fans. The album’s seemingly semi-80s influenced ‘Was My Life’ is another of the album’s high points. Stylistically speaking, it’s a classic big hair ballad type of song. Lyrically though, it doesn’t exhibit any of the trademarks of those overblown songs. Rather it is presents a relatively positive message. The album’s opener ‘I Regret’ offers its own thought-provoking lyrics and hard-hitting aggro-rock sound. It is just one more song out of the album’s twelve total that makes this record worth at least one listen by hard rock aficionados.

A.D.D. may not be one of the most well-known hard rock bands out there today. But the band’s credits speak for themselves. Having toured with hard rock heavyweights such as Korn, Halestorm, Alterbridge, and Sevendust among others has helped the band build an ever-growing fan base across the country. Considering that A.D.D. has performed alongside the likes of Sevendust, it comes as no surprise that the band included what is one of Sevendust’s most beloved songs in the form of ‘Black’ on its latest release. That song, which is also one of Sevendust’s earliest singles, is the anchor to Core. The band’s take on the song is a near spot-on cover with vocalist Margaret Young even sounding almost like Lajon Witherspoon as she sings, “Voices call/They call out my name, name/Well they say I’m different/Well I’m not the same, same/You say you want to, ah, be like me/Well, boy let me tell ya/You don’t know what I’ve seen/They say a devil lives in my soul/I promise not to let him take control/I’m mindin’ my own business/I ain’t doin’ nothin’ wrong.” The production work involved in the song makes it all the more interesting an addition to the album. That is because at points it actually sounds like Young is actually singing right alongside Witherspoon. And if she in fact isn’t, then it just goes to show her vocal prowess. And the dual guitar attack of Jeremy Sparta and Dave Adams makes the song even harder-hitting. Much the same can be said of the talents of drummer Jason Delismon. The end result is a song that despite being a cover is an impressive addition to A.D.D.’s new album. It proves to be one of a handful of songs on this record that shows why Core is an album worth at least one listen by any hard rock fan.

A.D.D.’s cover of Sevendust’s ‘Black’ is a solid work and an equally solid part of the whole that is Core. It is just one part of the record that makes it worth the listen. Just as interesting an addition to Core is the band’s own original song ‘Was My Life.’ Stylistically speaking, the song boasts a sound that is quite similar to that of the major ballads from the era of big hair and big riffs. Lyrically though, it is anything but another one of those songs. Rather it boasts quite the positive message. As the lyrics state, “I see you all/Wish I could reach out and touch you/Never known when this could all just end/I didn’t get your name but your face I will remember/So until we meet again/We’ll keep chasing these dreams/Even in the darkest times it’s not as bad as it seems/Through all the ups and downs/You still hung around…” And that’s just the first verse. The song takes a similar lyrical stance throughout the remainder of its near three-and-a-half minute run time. The overall message of the song is one of not giving up on one’s relationship no matter how difficult things get. Whether the relationship in question is a romantic relationship or one of friendship is a moot point. That is because this song could really apply in either situation. That being the case, it makes ‘Was My Life’ all the more impressive an addition to Core and one more song that makes Core worth at least one listen.

Both the band’s cover of ‘Black’ and its original, seemingly 80s-influenced ‘Was My Way’ are in their own right positive additions to the whole of Core. They are only part of the reason that any hard rock fan should hear this record at least once. The album’s opener ‘I Regret’ is yet another reason for listeners to hear this album even if just once. Musically speaking, ‘I Regret’ is a solid modern rock song that boasts an obvious Godsmack influence. Even Young’s vocal style here is closely similar to that of Godsmack front man Sully Erna. Lyrically speaking, ‘I Regret’ comes across in a somewhat introspective manner with Young singing in the song’s chorus, “So far/I’ve been hanging by a self-made rope of hate/Climbing out of a hole…..I regret I am me.” That is at least the interpretation on the part of this critic. Hopefully these lyrics prove right. If they do indeed prove right, then they paint a powerful picture. They seem to paint a picture of someone caught in the depths of depression, feeling those pained feelings mixed with a certain amount of anger. It’s an emotional situation that so many have and still do feel to this day. Those that have been there and who are today will find the strength to persevere having the ability to relate to such lyrics. Such power in the mix of musical and lyrical content contained here shows why ‘I Regret’ is itself one more positive addition to Core. And together with the likes of ‘Was My Way’ and the cover of Sevendust’s ‘Black’, all three songs make a strong argument in favor of listening to Core at least once. The album’s other nine tracks not noted here each offer their own value to the whole of Core. Listeners will agree with that when they hear the album for themselves. In turn, said listeners will also agree that hearing all twelve tracks on this album, it is indeed a work worth at least one listen and that holds its own easily against its more well-known counterparts in the hard rock realm.