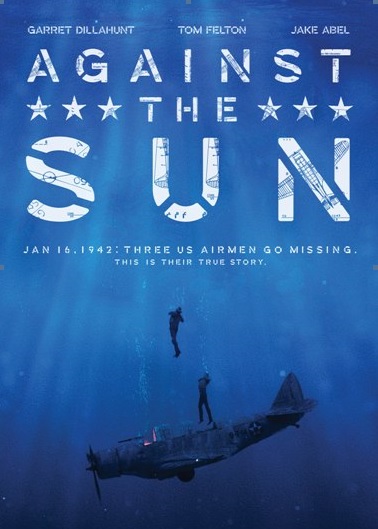 World War II is known today as one of the worst conflicts in human history. The destruction caused by the war and the war’s human cost was devastating to say the least. We have that knowledge thanks to those that survived and through extensive documentation both on paper and film. The combination of these elements has in many cases been translated into some of the most powerful and memorable stories of all time. Stories like that of Oskar Schindler, General George S. Patton, Jr., the battle of Midway, and the crew of the famed Memphis Belle are just some of those countless yet powerful stories that have come from one of the world’s worst conflicts. Now this spring, Anchor Bay Entertainment and Amplify Releasing will add another equally powerful story to those ranks when it releases the human drama Against The Sun.

Against The Sun will be released on DVD Tuesday, May 5th. The movie follows the story of three U.S. Navy airmen that crashed in the Pacific in the early days after America entered the war. After crashing in the middle of the Pacific without any food, water, or possible chance of help, pilot Harold Dixon (Garret Dillahunt—Deadwood, 12 Years a Slave, No Country For Old Men), bombardier Tony Pastula (Tom Felton—the Harry Potter franchise, Get Him to the Greek, Rise of the Planet of the Apes), and radioman Gene Aldrich (Jake Abel—Percy Jackson: Sea of Monsters, The Host, The Lovely Bones) must come together to survive. The trio faces not just the dangers of the open sea but its own emotional struggles, too as it floats thousands of miles from land. If this sounds familiar, it should. An equally well-known story is that of the crew of the U.S.S. Indianapolis, which was sunk by a Japanese sub, leading to the greatest loss of life at sea in U.S. Naval history. The 900 survivors of the sinking faced very similar challenges. Their story was turned into a made-for-TV movie in 1991 titled Mission of the Shark: The Saga of the U.S.S. Indianapolis. There is also a major motion picture centered on the ship in the works that will star Nicholas Cage. Getting back to Against The Sun, it will include a handful of bonus material including a behind-the-scenes featurette, a piece on the movie’s costuming, the movie’s special effects and more. The full list on bonuses is noted below:

Against The Sun will be available on DVD Tuesday, May 5th. It will retail for MSRP of $22.98. Its run time is ninety-nine minutes. More information on Against The Sun and other titles from Anchor Bay Entertainment is available online now at: