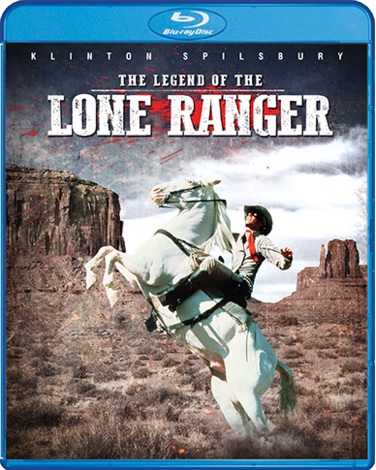 Two years ago, Walt Disney Studios released to the world what has become one of its least enjoyable movies in recent memory in the form of The Lone Ranger. The movie, which starred Johnny Depp and Armie Hammer has proven to be one of the studio’s least memorable movies in a long time. Thankfully next month, Timeless Media Group will do proper *justice* to the legacy of the Lone Ranger when it releases the 1981 movie The Legend of the Lone Ranger. Timeless Media Group will re-issue The Legend of the Lone Ranger on Tuesday, July 14th. It will be available in stores and online strictly on Blu-ray. The story behind The Legend of the Lone Ranger centers on Texas Ranger John Reid (Klinton Spilsbury–Lou Grant, Suddenly, Love). After he and his fellow Rangers are ambushed by the notorious bandit Butch Cavendish (Christopher Lloyd–Back To The Future 1 – 3, Cyberchase, Who Framed Roger Rabbit), Reid becomes the west’s most beloved crime fighter, enlisting the aid of his childhood friend Tonto (Michael Horse–Spirit: Stallion of the Cimarron, Passenger 57, Twin Peaks) and speeding across the land on his trusty steed Silver. With a cry of “Hi-Ho Silver,” The Lone Ranger sets off to fight not just Caendish but all who would commit wrongs across the west. The Legend of the Lone Ranger also starts two-time Academy Award-winner Jason Robards (Once Upon a Time in the West, All The President’s Men, Philadelphia) as Ulysses S. Grant. It will be available in stores and online on Tuesday, July 14th. It will be available on Blu-ray for MSRP of $19.97 but can be pre-ordered online now for a discounted price of $16.97 via the Shout! Factory online store at https://www.shoutfactory.com/film/action-adventure/the-legend-of-the-lone-ranger. More information on this and other titles from Timeless Media Group is available online now at: