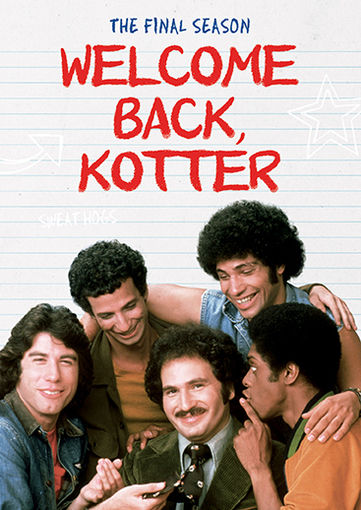 Mr. Kotter and the Sweathogs are back one last time next month.

Shout! Factory has announced that it will release the fourth and final season of the hit classic sitcom Welcome Back, Kotter on Tuesday, August 18th. Season Four continues the series’ tradition of offering up loads of humor and heart throughout its twenty-three episode run beginning right from the two-part season premiere which sees Mr. Kotter promoted to Vice Principal of James Buchanan High School. This causes the Sweathogs to drop out. Of course their departure doesn’t’ last long. The season’s second episode, Beau’s Jest,” is just as entertaining as the Sweathogs welcome a new member named Beau De Labarre into the group. Beau’s introduction to the group makes for its own share of laughs. And in none of the most interesting of the season’s moments, Horshack, realizing that he will be moving, marries Mary in the two-part story arc “Oo-I Do.” These episodes are just a few examples of the humor and heart that continues to run through the series. The series’ writers also tackle the issue of alcohol abuse in “Come Back, Little Arnold.” On a lighter note, the old adage that imitation is the sincerest form of flattery is put to the test when the Sweathogs have to deal with a younger student that tries to impress them in “Washington’s Clone.” These are just a handful of the episodes that make Welcome Back, Kotter: The Final Season a fond farewell for fans. The season’s complete episode listing is noted below.