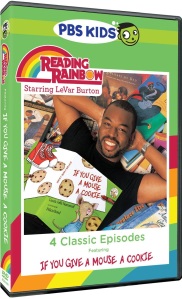 Reading Rainbow is one of the greatest programs to ever be included as part of PBS’ daily broadcast lineup. The pro-literacy program ran as part of the network’s daily lineup for some twenty-three years, running from June 6th, 1983 to November 10th, 2006. Considering its long and largely successful run, it was a shock to most audiences when the program ended. Even more of a shock was the announcement in 2014 that a Kickstarter campaign aimed at funding Reading Rainbow’s return was underway. Sadly, it turned out that while the fundraiser was way more than successful, Reading Rainbow’s return was online only rather than on PBS. One can only guess why this was the case. Thankfully though, PBS came through for fans of the beloved series this year and released two volumes of episodes from the classic series on DVD in the form of Reading Rainbow: If You Give A Mouse A Cookie and Reading Rainbow: Animal Cafe. The prior of the pair was released this past May in stores and online. This DVD is one that audiences of all ages will appreciate; especially the show’s original audiences. The main reason that audiences will appreciate this disc is that it presents four classic episodes of the series in their entirety. It’s the first time that they have seen the light of day, too. The stories and related central topics featured in each episode are just as important to the whole of its presentation. Last but hardly least worth noting of these episodes is the work of host Levar Burton. Burton was just as wonderful of a host in these episodes as he was early in the series’ run. Simply put, his presence in front of the camera felt just as genuine in these episodes as in the show’s early episodes. All three elements combined, they show PBS Kids’ new Reading Rainbow DVD to be one more welcome addition to any family’s home DVD collection.

PBS Kids’ new Reading Rainbow DVD When You Give A Mouse A Cookie is one of the most welcome DVDs to be released by the network so far this year. It is a piece that audiences of all ages are sure to enjoy. That is especially the case in a digital age in which children are being increasingly driven away from books and more towards all things computers. This collection of classic Reading Rainbow episodes is anchored by the episodes themselves. Audiences will note in watching these episodes that PBS Kids and PBS Distribution have presented them in their entirety complete with feature story and book reviews by a select group of young readers. Obviously those young readers are much older by now. That aside, the fact that PBS Kids and PBS Distribution would go to such lengths for audiences is a bold statement. All four episodes have also obviously been tweaked in terms of their production values. While the original, grainy look of the episodes is still clear, it isn’t overpowering. The audio mix is just as impressive. All things considered here, all four episodes featured in Reading Rainbow: If You Give A Mouse A Cookie will impress the series’ original just as much as the episodes’ first-time viewers. It will remind those older audiences what once made this series so great. It will also show those younger viewers what continues to make it great even today.

The presentation of the four episodes featured in Reading Rainbow: If You Give A Mouse A Cookie in their entirety is plenty of reason for any family to add this new DVD to their home DVD library. The episodes are presented complete with feature story, book reviews and everything else in their original presentation will impress the series’ original audiences just as much as its younger, first-time viewers. It is just one reason that this DVD stands out in this year’s crop of new DVDs for children and families. The content presented in each episode is just as important to the compilation as the episodes’ presentation. The disc’s title episode teaches young readers about chain reactions through the use If You Give A Mouse A Cookie. There is also an invaluable lesson about never being too old to learn new things in the set’s closing episode, featuring the book Mr. George Baley. And in Owen, the episode’s title book centers an equally important discussion on changes that come along in life and accepting said changes. That is not to discount Two Old Potatoes and Me. Even this book and episode collectively teach their own important lesson, too. Regardless of which episode one chooses, there is not one bad episode presented here. All four episodes will entertain older audiences and educate younger audiences regardless of their ages. not all four will educate audiences the same ages. but there is still something for nearly every viewer presented here. That being the case, it gives Reading Rainbow: If You Give A Mouse A Cookie a DVD that was well worth the wait.

The presentation of the episodes featured in Reading Rainbow: If You Give A Mouse A Cookie and the content of the episodes together makes this DVD one that every family will want to have in their homes and should have in their homes. Of course for all of the importance that both elements present in this argument, there is still one more reason that audiences will and should have this DVD in their home collections. That reason is host Levar Burton’s presence. Audiences that are familiar with this classic series will note that the episodes presented here were lifted from the latter portion of the show’s run. That being the case, it would have been so easy for Burton to simply phone it in in each episode. Yet even so late in the show’s run he didn’t do that. He still came across as being just as genuine in his personality as in the show’s early days. His short PSA of sorts at the end of the disc noting the importance of teaching children to read shows that he was being serious in his on-screen persona, too. He really did then and does now care about children’s literacy and even that of their adult counterparts. It’s nice to see that he wasn’t and isn’t like all of those other children’s hosts (and hosts in general) that take that easy road. It makes each of the disc’s episodes that much more enjoyable. Together with the episodes’ content and their full presentation, this final element/reason rounds out the reasons that Reading Rainbow: If You Give A Mouse A Cookie is such a wonderful new release from PBS Kids and PBS Distribution. It is so wonderful that audiences of all ages will agree that it should be in every family’s home DVD collection along with its companion disc Reading Rainbow: Animal Cafe. That disc will be discussed next week.

Reading Rainbow: If You Give A Mouse A Cookie is one of the most welcome new DVDs to be released by PBS Kids and PBS Distribution so far this year. It is also one of the best new DVDs for kids and family overall this year. That is thanks to the presentation of its featured episodes in their entirety and to the content of said episodes. Host LeVar Burton’s on screen persona in these is just as genuine as in the series’ early days, too. It rounds out the reasons that every family will want to and should have this DVD in their home DVD collections. Reading Rainbow: If You Give A Mouse A Cookie is available now in stores and online. It can ordered online direct from PBS’ online store now at http://www.shoppbs.org/product/index.jsp?productId=60958876&cp=&sr=1&kw=reading+rainbow&origkw=Reading+Rainbow&parentPage=search. More information on this and other releases from PBS Kids is available online now at: