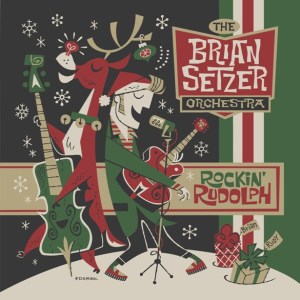 Ten years have passed since Brian Setzer and his feow musicians in The Brian Setzer Orchestra released their last holiday album. Now with Halloween only days away at the time of this posting and Christmas still well over a month away, Setzer and company have brought audiences an early present for all of the group’s fans. The present comes in the form of its new album Rockin’ Rudolph. Being the group’s first Christmas album in a decade it is a welcome return. Given, there is no original material presented in this record per se. However, the group’s upbeat renditions of the featured holiday standards are within themselves plenty of reason to have this record echoing through any family’s house this holiday season. This is obvious right from the album’s opener, the big band rendition of ‘Rockin’ Around The Christmas Tree.’ The song boasts the group’s trademark swing and also keeps the song’s original feel at the same time. ‘Rockabilly Rudolph’ is more proof of what makes BSO’s new holiday such a welcome return. It is anything but the original song. Rather, Setzer and company have taken the classic tune and completely re-imagined it. One could even say that they turned it on its ear. The band’s updated take on ‘O Little Town Of Bethlehem’ is just as intriguing. That is because Setzer and company have also re-imagined this holiday standard in its own unexpected fashion. All three songs are in themselves clear examples of why Rockin’ Rudolph is such a welcome return. Together with the collection’s other nine covers the collection in whole proves to be quite the surprisingly enjoyable musical holiday treat.

The Brian Setzer Orchestra has brought audiences quite a surprisingly enjoyable musical holiday treat in Rockin’ Rudolph. The twelve-track, thirty-four minute collection of holiday standards is such a welcome return for Setzer and company because unlike so many other well-known mainstream acts out there, Setzer and his fellow musicians don’t just perform the standards and call it a day. Instead, they take the noted standards and build on them at some points while totally re-imagining them at others. The end result is a record that any family will want echoing through their homes this holiday season. This is obvious right from the album’s opener ‘Rockin’ Around The Christmas Tree.’ Setzer and his band mates have taken the original standard here and given it a full-on big band swing touch that also features Setzer’s own rockabilly style on guitar. The album’s liner notes don’t specifically note who handled the drums on this song (apparently there were two drummers utilized in recording the featured songs). Regardless, the drums absolutely swing and will have listeners dancing in their kitchens and living rooms as they bake those christmas cookies and drink their eggnog. The same can be said of the band’s horns. They swing just as much as the group’s drummer. The horns and drums set alongside Setzer’s own trademark rockabilly style sound make this cover one that stands head and shoulders above all of its other renditions across the musical universe. It is just one example of what makes this record such a solid collection of holiday covers, too. The band’s updated take on ‘Rudolph The Red-Nosed Reindeer,’ titled here ‘Rockabilly Rudolph’ is another example of everything right with this record.

The big band swing of ‘Rockin’ Around The Christmas Tree’ presented by the members of BSO makes the song a great first impression from Setzer and company in its first new holiday record in a decade. It shows that Setzer and his fellow musicians offer audiences more than just the standard holiday covers. And it does so quite convincingly, too. ‘Rockabilly Rudolph,’ the band’s take on ‘Rudolph The Red-Nosed Reindeer’ is just as enjoyable for audiences. That is because it is yet another piece in which Setzer and his fellow musicians do more than just cover the old standard. Instead, they completely turn the song on its ear with a rockabilly take on the classic. It goes without saying that this rendition of ‘Rudolph The Red-Nosed’ sounds almost nothing like the original. And that is not a bad thing, either. There’s even a tribute to James Bond with the famous spy’s theme song incorporated into the song. Setzer is the main star of this piece. Though, his band mates shine just as much. All things considered here, this original take on the holiday standard is something that audiences won’t hear anywhere else. It proves even more why Rockin’ Rudolph is such a standout holiday offering and an equally impressive return for Setzer and his fellow musicians to the realm of holiday music. It is of course still not the only example of what makes this record so surprisingly enjoyable. The group’s take on ‘O Little Town Of Bethlehem’ is just as interesting to hear.

BSO’s cover of ‘Rockin’ Around The Christmas Tree’ and ‘Rudolph The Red-Nosed Reindeer’ are both clear examples of why the group’s first holiday album in ten years is such a welcome collection in any family’s home this holiday season. While both songs show in their way just how much this compilation has to offer audiences they are only a couple of examples of just how much the record offers. The group’s take on ‘O Little Town Of Bethlehem’ is one more example of just how much this record sets itself apart from all of the year’s other holiday music offerings. As most audiences know, ‘O Little Town Of Bethlehem’ is quite the solemn piece’ in its original presentation. In the case of BSO’s rendition, the band has replaced that much more solemn feel with something more along the lines of a slow jazz sound. It’s quite the departure from the far more reserved sound to which audiences are accustomed. That’s not to say that it is a bad thing. Rather it is just a something different. The very fact that Setzer and his band mates have opted to go a different route just as much here as with the record’s other covers makes the record in whole all the more interesting. Speaking of those songs, the collection in whole is so original in regards to its renditions that audiences will agree in hearing it that it is in fact quite the surprisingly enjoyable musical holiday treat for any family.

BSO’s covers of ‘Rockin’ Around The Christmas Tree,’ ‘Rudolph The Red-Nosed Reindeer’ and ‘O Little Town Of Bethlehem’ are all good examples of just how much Rockin’ Rudolph has to offer listeners. Instead of just taking the easy road, all three songs show a group that opted to take the original tunes and build on them in some cases and even totally re-imagine them in others. That is displayed just as much in the rest of the album’s songs as through the trip directly noted here. Whether one chooses one of that trio or any of the others not directly noted, one will agree that the album in whole proves to be one of the few holiday music collections actually worth purchasing this year. It is available now in stores and online. More information on this and other titles from Brian Setzer and the Brian Setzer Orchestra is available online now along with all of the group’s latest news at: