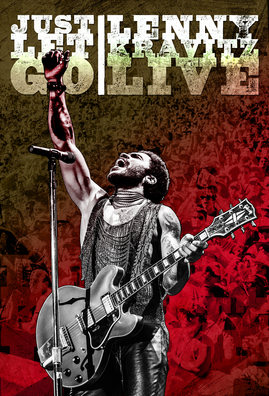 Rocker Lenny Kravitz has made quit the name for himself over the course of his career. For more than twenty-five years he has churned out ten albums (many of which have gone gold and even platinum and not just once either), numerous singles, a handful of compilations and has also lent his talents to other projects all while touring the world just as many times over. Speaking of his touring Eagle Rock Entertainment recently gave audiences yet another chance to experience Kravitz’s live show last month in the form of the new rockumentary Lenny Kravitz Live: Just Let Go. As noted, Just Let Go is a music documentary, not a pure concert presentation. It is not the first of its kind either. That is not a bad thing, though. As a matter of fact the fashion in which the program was presented is at the core of its success. that will be discussed in more depth shortly. In the same vein the feature’s editing is just as noteworthy. Last but hardly least worth noting of the program’s overall presentation is its combined set list and stage presence of Kravitz and company. All three noted elements together are just the tip of the proverbial iceberg in the documentary’s presentation. There is also a handful of bonus live performances included in the presentation worth noting and the overall look of the program in whole just to name a couple more elements that could be discussed. Whether for those elements or any of those more directly noted, the presentation in whole proves in the end to be one that any of Lenny Kravitz’s fans will enjoy.

Lennny Kravitz’s new rockumentary Just Let Go is a presentation that none of the rocker’s fans will *ahem* want to let go. This extensive tour documentary is one that every one of his fans will enjoy. The main reason for this is the fashion in which the program is presented. It is not the first of its kind to ever be released by any act. However in viewing audiences will note that it doesn’t come across like so many of those aforementioned pieces. The noted programs are typically composed of short live segments coupled with guerilla-style off-stage segments showing acts going here, there and everywhere. This program, while not the polar opposite of those presentations, is close to it. Rather than the typical guerilla-style off-stage segments, audiences are instead treated to a series of deeply insightful interviews with Kravitz and his fellow musicians. Some of the interviews in question are deep, single-person sit down segments while others such as those featuring Kravitz’s horn players sees them relaxing, playing a game of pool while they discuss life with Kravitz and their fellow musicians. Viewers will be interested to learn about Kravitz’s apparently devotion to giving audiences the absolute best show possible yet his gentility with his band mates. There are also some light-hearted moments shared throughout, too such as the interview with Kravitz’s backup vocalists. Audiences will laugh uproariously as they discuss their first meeting with him and their apparent……appreciation for him for lack of better wording. Audiences will get that joking reference when they see the program for themselves. Those are just a few examples of how Just Let Go’s overall presentation makes it stand out so clearly from other rockumentaries. The concert segments are just as important to note.

The combination of on-stage and off-stage elements presented over the course of Just Let Go shows in itself to be one of the program’s most important elements if not the single most important of the program’s elements. That’s because they are the elements that draw in audiences. Of course without the work of those charged with editing the video for its presentation, none of the noted video would be of any consequence. Luckily those individuals handled their duties with the utmost prevision and expertise. The audio levels rarely if ever have to be adjusted over the course of the program. And the vintage grainy effect used from beginning to end really does give the presentation in whole a special feeling that in itself stands apart from so many other music documentaries out there. On another level, little things like cuts between the on-stage and off-stage segments are clean. At some points the connection between specific songs and interview segments is perfectly timed and cut. It’s little things like that attention to detail that make this presentation one that every one of Kravitz’s fans will enjoy. It also once again mirrors Kravitz’s statement in regards to wanting to give audiences the best experience possible. It’s even more reason that audiences will enjoy the program, but once more not the last. The combined set list and stage presence presented in the program’s live segments rounds out the primary ways in which Just Let Go proves to be a program fans won’t want to let go.

The set list featured throughout Just Let Go’s live segments combined with the stage presence of Kravitz and his fellow musicians round out the core ways in which the program shows itself to be one that Kravitz’s fans will thoroughly enjoy. It would be a lie to say that the set list featured in this presentation is career-spanning or even defining. However, it is true that of the presentation’s eighteen total performances they cover quite a wide swath of his now ten total albums. It includes songs from Strut, his most recent album, 5, Are You Gonna Go My Way, and even his 1989 debut record Let Love Rule among others. The band’s stage presence throughout each performance makes the whole thing all the more enjoyable. Watching Kravitz and company perform, it is clear that a Lenny Kravitz concert is more than just a concert. It is in fact a full experience in every sense of the word. It is something from which audiences walk away from knowing that they will never forget. From the sheer power of the songs to the band’s own energy in delivering said songs, the concert in whole is one of those things that makes a person understand the importance of taking in a live show. And it translates quite well in the case of these performances. That solid translation couples with the expert work of those charged with editing the presentation to make Just Let Go quite the enjoyable tour documentary. The on and off-stage segments that lie at the center of the program solidify that argument. All things considered, Just Let Go shows in the end to be a piece of which no fan will want to let go.

Lenny Kravitz Live: Just Let Go is a fittingly titled new presentation from the veteran rocker. It stands out solidly from so many other run-of-the-mill tour documentaries that are out there today. The presentation’s editing is just as worth noting in its success. Last but not least worth noting is the combined set list and stage presence on display throughout the presentation. All three elements show in their own way why none of Kravitz’s fans will want to let go of his new tour documentary. And they are just the tip of the proverbial iceberg here, too. The bonus performances and overall look of the presentation are worth noting, too. One would be remiss to ignore them. And if there were time enough to cover them, too this critic would touch on them, too. Regardless, it can be said of each element that in whole they make, again, Just Let Go a presentation that none of Kravitz’s fans will want to let go. It is available now in stores and online. More information on this and other titles from Eagle Rock Entertainment is available online now at: