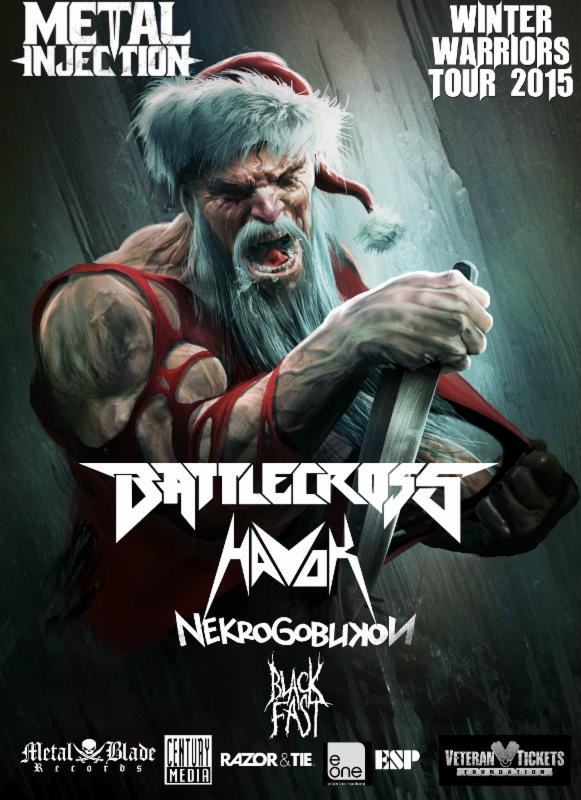 Battlecross is heading back on the road again this fall and winter.

Battlecross announced this week that it will headline the 2015 edition of the Winter Warriors Tour. The tour, which is in support of its latest full-length studio recording Rise To Power, kicks off Friday, December 11th in Pittsburgh, PA. The six-date tour runs through December 18th in Flint, MI. The band has teamed up with the Veterans Ticket Foundation again in order to offer free admission to the tour for the nation’s military veterans. Vets wanting to attend one of the upcoming shows can sign up for that free admission online at http://www.vettix.org beginning next Tuesday, November 17th. As an added means of honoring America’s veterans, the band is donating a portion of sales from its shirts to VetTix so that veterans and their families can attend the band’s shows and other events in their respective areas for free. The band will also spend all day November 11th honoring America’s veterans via its official Twitter page at http://twitter.combattlecross. Those military families that want their veterans to get a shout out from the band tomorrow can submit said person(s) name(s) online at http://smarturl.it/honoravet.

Battlecross won’t be alone when it hits the road. Havok, Nekrogoblikin, and Black Fast will serve as support acts for the length of the tour. General public tickets for the Winter Warriors tour go on sale this Friday, November 13th. Those that purchase tickets in advance will be entered for a chance at a free guitar.

Battlecross is currently touring alongside its label mates in Gwar. The bands will be at the NorVa November 11th in Norfolk, VA. From there they will head up the East Coast before heading south again for a performance at The Orange Peel in Asheville, NC on November 17th. The bands will also perform live at Tremont Music Hall in Charlotte, NC on November 24th. These are just some of the bands’ upcoming live dates. Battlecross’ tour schedule with Gwar and its upcoming schedule on the Winter Warriors Tour is noted below.

More information on Battlecross’ upcoming tour dates is available online now along with all of the band’s latest news at: