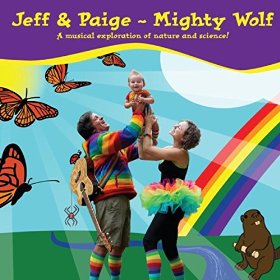 Jeff Kagan and Paige Doughty are likely not one of the more well-known names in the world of children’s music. Interestingly enough the husband and wife duo is nothing new to that realm. Kagan has two solo albums. And the pair together has released two full length studio recordings, all of which have been released without the help of any of the major kindie rock labels out there. And the couple hasn’t stopped there. Last Friday, the duo released its third full-length studio recording Mighty Wolf. Named apparently after the couple’s infant son, Mighty Wolf continues the couple’s long-running tradition of mixing that musical and educational content that it has used in each of its previous recordings. This includes Kagan’s own solo recordings. Even within the context of the album’s musical content, Kagan and Doughty don’t even to one style. That is just one way in which this latest recording stands out. The previously mentioned lyrical content is another important element to consider in this album. Just as the couple mixes things up with the album’s musical content, so does it do with the album’s lyrical content, too. There is a lesson about ecology and a much larger elementary level biology lesson spread across the album’s twenty-three total tracks. Speaking of those tracks, the album’s sequenncing rounds out its most notable elements. While Mighty Wolf consists of twenty-three total tracks, only about half of the presented tracks are actually songs. The other thirteen tracks are set-ups for the the featured songs. The sequencing of all twenty-three songs maintains the album’s fluidity and in turn will keep parents, educators, and children alike fully engaged. That is not to say that the album’s musical and lyrical content won’t keep listeners engaged. As a matter of fact, both elements partnered with the album’s sequencing make the album in whole just as much of a good introduction to Jeff and Paige for new audiences as it is a re-introduction to the couple for those that are more familiar with the pair’s body of work.

Jeff and Paige’s latest full-length studio recording is a good re-introduction for those that are familiar with the couple’s music. For those that might not be so familiar with the duo’s music on the other hand, it is just as good of an introduction. That is because its mix of musical and lyrical content is similar to that of its previous recordings. The musical content displayed in this record is especially worth the note because on that more macro level, the duo even mixes up the sounds exhibited throughout the course of the record. Early on in the album’s run, Kagan and Doughty present a light kindie rock/pop sound in ‘Triple Rainbow.’ This song isn’t the only instance in which that sound is exhibited. ‘Black Widow,’ ‘Beaver,’ and ‘Dead and Delicious’ each have their own original kindie rock/pop sound that stands out from the other noted songs. ‘Dead and Delicious’ offers something of a blues-influenced sound while ‘Beaver’ has more of a light rock influence a la Dave Matthews Band and others of that ilk. ‘Triple Rainbow’ on the other hand has more of a pure acoustic rock sound. These are just a few of the album’s songs that boast a rock sound. ‘Lightning’ also boasts its own kindie rock sound. As if that isn’t enough for listeners, Kagan and Doughty don’t stick to just a variety of kindie rock sounds throughout their new record. There are also Country/Americana variants presented throughout other featured tracks. Those tracks include: ‘Grandma Gatewood,’ ‘That’s Not The Way,’ ‘Aphid Banquet For Two’ and the album’s closer ‘The Great Monarch Migration.’ The couple even included a poppy sound in ‘The Arctic’s Freezing’ and ‘Ungulate.’ The fact that this album boasts such a myriad of musical stylings from beginning to end (and that there are no defined parameters in the transition from one genre to another) is a big plus for the album in whole. It is just one part of what makes this record worth hearing regardless of listeners’ familiarity with Jeff and Paige. The different lyrical topics (and the topics within those topics) adds even more interest to the album.

The various styles of music that are presented throughout the course of Jeff and Paige’s new album are in themselves plenty of reason for listeners to hear the couple’s latest full-length studio recording. While that content is important to the album’s overall presentation in its own right, it is just one part of what makes the album worth the listen. The mix of topics presented in the album’s lyrical content (and the topics contained within those topics) plays an equally important role in the album’s presentation. The central topics in question are topics of biology and ecology. This is nothing new for Jeff and Paige. However the topics that lie within those topics are what really make the picture painted by the album’s lyrical content whole. The biology lesson contained within the album’s songs centers on different animals of the world and their importance to their respective ecosystems. ‘Black Widow’ and ‘Dead and Delicious’ dispel the myths and stereotypes of spiders and certain birds. In the case of ‘Dead and Delicious’ the bird in question is a raven. It is interesting that Jeff and Paige would go with a raven versus a vulture considering the negative reputation that surrounds vultures. The reality of vultures is that just like ravens, they are basically nature’s garbage men, too. They help clear away road kill, and other dead animals by scavenging. That is not to say that they shouldn’t have gone with a raven. A raven is a good choice. It is just a surprise that the duo opted for a less familiar reference. ‘Beaver’ explains through song the important role that beavers play in building their dams while ‘The Great Monarch Migration’ and ‘the Arctic’s Freezing’ are more general. The prior discusses the life span of monarch butterflies while the latter discusses everyday life for animals in the Arctic.

The lesson about biology and biodiversity is just one of the lessons presented in this album. There is also a lesson about ecology presented in ‘Grandma Gatewood’ and ‘That’s Not The Way.’ ‘Grandma Gatewood’ presents the lesson about ecology and preservation through a story about the real life figure Emma Rowena Gatewood. Gatewood is famous for being the first woman to have hiked the entire Appalachian Trail (that is 2,168 miles) by herself and in one season, too. The song tells of her great deed and at the same time celebrates the beauty of the Appalachian Trail. Essentially it emphasizes the need to protect it (and in a larger picture, nature in whole) for the next generation that might want to try to accomplish her feat. On a different note, ‘That’s Not The Way’ discusses the interweaving roles that man and nature play on one another each day. It is a relatively broad topic. But the duo pulls it off quite well here. Together with the lessons on biology and biodiversity, the lessons centered on ecology and nature preservation show in whole why the varied lyrical topics presented throughout this album are just as important to the record’s whole as its varied musical styles. The two elements together give listeners new and old alike plenty of reason to hear Jeff and Paige’s new record. They are just part of the reason that listeners will want to hear Mighty Wolf. The album’s sequencing rounds out the reasons that the album proves itself worth the listen.

The musical and lyrical content that make up the body of Mighty Wolf makes the record an ahem* mighty collection of songs. While both elements together play an important role in the success of this record, they are only a portion of what helps it live up to its title. The album’s sequencing rounds out the ways in which it proves itself to be a strong new effort from the independent children’s entertainers. As previously noted, not all of the tracks featured in this record are musical compositions. Roughly half of its twenty-three total songs are musical numbers. The other tracks are little skits that Jeff and Paige use to introduce each song. On the surface this may not seem like much. However, the sequencing of the musical and non-musical tracks together is more important to th record’s overall presentation than one might think. The introductions serve a double purpose. Their primary purpose is to serve as an introduction to each lesson. The secondary purpose of each non-musical track is as a breather of sorts between songs. They help to break things up as the album progresses. The end result is an increased chance of keeping listeners engaged. It is a smart approach to keeping the album’s pacing solid. That solid pacing combined with the album’s equally engaging musical and lyrical content makes Mighty Wolf a truly mighty new release and an equally mighty independent release for the children’s entertainers.

Mighty Wolf is only the third full-length studio recording that Jeff Kagan and Paige Doughty have recorded together. For Kagan, it is his fifth full-length recording overall. That aside, this latest effort from the husband and wife children’s entertainers is indeed a mighty new release. This is exhibited through its variety of musical and lyrical content. Its sequencing plays just as much into the album’s success. All three elements are equally important to the album’s overall success in their own right. Collectively they make Mighty Wolf a mighty success for Jeff and Paige. Mighty Wolf is available now. It can be ordered online now via CD Baby at http://www.cdbaby.com/cd/jeffpaige and downloaded via Amazon at http://www.amazon.com/Mighty-Wolf-Jeff-Paige/dp/B017YFSL7C/ref=sr_1_1?s=music&ie=UTF8&qid=1448918695&sr=8-1&keywords=Jeff+and+Paige+Mighty+Wolf. More information on this and other releases from Jeff and Paige is available online now along with the latest news from Jeff and Paige at: