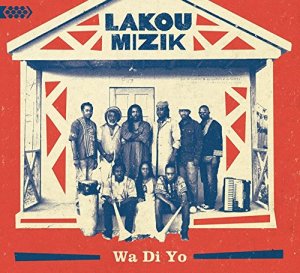 The islands of the Caribbean Sea are among the richest in the world when it comes to musical variety and depth.  While being a small, contained region, the islands within the Caribbean have produced some of the biggest names in the music industry for the past half decade or so.  Harry Belafonte, Afro-Cuban All Stars, and Buena Vista Social Club have all hailed from the islands of the region as have Bob Marley and the Whalers, Gloria Estefan, and Tito Puente among so many others.  These are just a handful of acts that have made the Caribbean one of the world’s greatest musical hot spots for decades.  Now yet another act–Lakou Mizik–looks to add its name to that list of greats with its debut full-length studio recording Wa Di Yo.  The Haitian collective’s twelve-song debut offering is a good start for the  group in its attempt to make its mark in the Caribbean music community.  That is thanks in large part to the combination of its infectious musical compositions and its equally insightful lyrical content.  The album’s closer and title track is just one example of how that mix of music and lyrics makes Wa Di Yo such a solid first effort from Lakou Mizik.  ‘Anba Siklon’ (In A Hurricane) is another example of how that mix makes this record an impressive debut for Lakou Mizik.  The same can also be said of the album’s first full track ‘Poze’ (Calm Down).  Its semi-zydeco sound coupled with its lyrics makes it a great starting point for the group and just one more example of how the album’s music and lyrics together make it not just an impressive first effort from Lakou Mizik but also the year’s first great new World Music offering.  That is not to ignore any of the album’s other songs.  Each of those tracks is just as important to the album’s success.  Altogether, the twelve songs that make up the body of this record make it a record that any World Music aficionado should have in his or her own music library.

Lakou Mizik’s debut full-length studio record Wa Di Yo is 2016’s first great World Music offering.  Roughly translated from its Haitian Creole root the album’s title means “The King Said To Them.”  Considering the album’s overall musical content it comes across as a fitting title.  That is because the lyrics within each of the album’s twelve songs seem to flow from the group like powerful words from an unnamed ruling person or body to the masses.  The power in those messages couple with the album’s musical arrangements to make the album one that every World Music aficionado should have in his or her personal music library.  That is evident right from the album’s closer and title track.  In regards to its musical content, the song mixes the Lakou Mizik’s traditional Haitian musical elements with guitars and drums for a gentle, flowing sound that will move listeners in its own deep fashion.  The song’s lyrical content will move listeners just as much with its stirring messages of hope and emotional strength.  Those messages are evident as the group sings, “I forseen the path The devil’s built walls to block me/Despite what I went through/I try to cross through/The rivers will not pull me down/I fall, I fall.”  The group goes on to sing in the next verse, “As long as you’re alive/Don’t give up the fight/You are in a battle/Life is up but sometimes upside down/Those who don’t understand say I’m lazy/You are wrong I say/Those who don’t understand Say that I didn’t start the game well/It’s not rue/Light.”  These positive sentiments exhibit quite well exactly what is meant in saying that the album’s insightful lyrical content and musical content make it so impressive.  There are also mentions of God’s angels and just as much other inspiration for audiences.  In itself the song’s lyrical content more than exhibits what makes this song a clearly smart addition to the album’ body.  Together with the song’s gentle, flowing musical content, both elements make this song one of Wa Di Yo’s best moments and just one example of why the album is 2016’s first great World Music offering.  It is just one example of what makes the album so great, too.   ‘Anba Silkon’ is another example of what makes this album stand out so well.

Wa Di Yo’s closer/title track is a prime example of what makes Lakou Mizik’s new album 2016’s first great World Music Offering.  That is thanks to the combination of the song’s musical arrangement and its deeply thought-provoking lyrical content.  It is only one example of what makes the album stand so tall above the year’s other World Music offerings so far.  ‘Anba Siklon’ (‘In A Hurricane’) is another important addition to the album.  Just as with ‘Wa Di Yo’ that is thanks to the juxtaposition of its lyrical and musical content.  In terms of its musical arrangement the song comes across in rather celebratory style complete with tambourine, guitar, and what sounds like an accordion.  It might in fact be something wholly other than an accordion.  That is just this critic’s own thought.  What’s interesting about all of this together is that one could argue that it is in direct contrast to the song’s lyrical theme.  In regards to the song’s lyrical theme, it comes across as a commentary centered on people from other countries capitalizing on the trials faced by the people of Haiti.  That inference is made as the group states in the song, “While the hurricane hits/In that bad weather/Some people are changing 7 into 9/While the hurricane hits/In that bad weather/Some people are changing 4 into 8/Hmmm/They changing 7 into 9/Hmmm/They changing 4 into 8.”  This is a reference to certain parties falsifying data about the number of people affected by natural disasters and other trials faced by the people of Haiti and their corrupt morals in doing so.  The group goes on to sing, “Why are you laughing about my problems/Contributing to my suffering/You trample on my happiness/Have mercy/You trample on my culture/Why do you take advantage of my weakness/You are using my pain/Have mercy/Haiti will change/We’ll see/This country will move forward/We’ll see Haiti will rise/We’ll see/Raise your hand and say yes.”  That revelation at the song’s end accounts for the song’s upbeat vibe.  And in hindsight it actually heightens the emotion in the remainder of the song’s lyrical content.  The song’s other lines come across as being deeply emotional at first glance.  But considering that revelation at the song’s end it makes them more of a statement of what the people of Haiti have been put through rather than some oh-woe-is-me statement.  It is a commentary that in whole says despite everything that has happened to the people of Haiti, Haiti will prevail and improve.  It gives the story presented in the song’s lyrical content a wholly different identity.  In turn it leaves listeners thinking even more deeply and talking after the fact.  Keeping that in mind it shows even more why this song is another prime example of what makes Wa Di Yo stand out among this year’s crop of World Music offerings.  Even as important as it is it still is not the last example of what makes the album stand out.  ‘Poze’ (‘Calm Down’) is one more important addition to the album’s body.

‘Wa Di Yo’ and ‘Anba Siklon’ are both key additions to Lakou Mizik’s new album Wa Di Yo.  That is because both songs will leave people thinking and talking long after they (and the album) have ended thanks to the juxtaposition of their lyrical and musical content.  As important as both songs are in presenting the album’s strengths they are anything but the only notable additions to the album.  ‘Poze’ (‘Calm Down’) is just as notable as those songs.  The song’s lyrical content stands as its foundation.  It presents a message that is familiar to every corner of the musical universe.  The message in question is a statement of confidence.  It comes across as a statement to a person’s detractors, noting to those people, “Calm down you people/Keep quiet I say/You people badmouthing me/I won’t pay attention/A message for you/I say keep calm!.”  The song cites an old expression (perhaps Haitian expression?) in its message, noting “Staying calm is the best medicine for the body/You may not fall if you’re not guilty/I’m the strongest/I beat you/I break the record/You agree/After this whip/Your heart pounds/You might ask God to take your life/I put you down calmly.”  The song goes on to point a finger at the gossips and naysayers, leaving no doubt as to the strength of those that stand against said figures.  Yet again the song’s musical content is in direct contrast to its lyrical content.  If this had been penned by any American act it likely would have been quite forceful in terms of its musical content.  Yet here, the song’s musical content is upbeat and just as celebratory as the album’s other songs.  It serves to show again an inner strength in the song’s subject.  Whether in regards to a celebrity addressing the gossip hounds and critics or just a person in general having to deal with people running their mouths the positive vibes presented in the song’s musical and lyrical content paint a picture that listeners will want to experience time and again.  The same can be said of the album’s other offerings.  All things considered Wa Di Yo proves in the end to be the best new World Music offering so far this year.

Wa Di Yo, the debut offering from Lakou Mizik is a solid start for the Haitian music collective.  That is because from its thought-provoking opener to its equally insightful closer it keeps listeners completely engaged.  Its musical  and lyrical content are both at the center of that engagement.  Whether making social statements, semi-political commentaries, or tackling other topics, Lakou Mizik impresses with its debut album from start to finish.  Wa Di Yo will be available in stores and online Friday, April 1st.  More information on the album is available online along with all of the group’s latest news at: