Zakk Wylde releases his new album Book of Shadows II this week.  Ahead of its release, the veteran rocker debuted the video for one of the album’s songs last week.

Zakk Wylde premiered the video for the song ‘Sleeping Dogs’ last week.  The video can be viewed online now via Wylde’s official Vevo channel at https://www.youtube.com/watch?v=_dtxOKXo9aI.

The video follows Wylde as he walks through a rather bleak looking forest setting.  Within the forest is an interesting group of figures.  It was helmed by long time Black Label Society collaborator Justin Reich.  Of Wylde discussed Reich’s involvement in the video in a recent interview, noting Reich’s talents behind the lens.  “Black Label Brethren O’ Doom Father Justin Reich Did Another Amazing job Directing the video,” he said.  He jokingly added of Reich’s vision, “I asked Father Justin to capture the sights, sounds, smell and feel of the first day my parents dropped me off at kindergarten. Watching the video made me realize why I’m so fond of reading and vegetables.”

While he doesn’t appear in the visualized take on the song Slipknot/Stone Sour front man Corey Taylor does make an appearance on the LP version of the song.  Wylde also shared his thoughts on Taylor’s involvement in the song noting, “Having Father Corey Taylor’s brilliant Voice sing on ‘Sleeping Dogs’ fulfilled my vision of the two of us as the modern day Simon & Garfunkel.”  Not one to ever be entirely serious he added of his relationship with Taylor, “We may not be as legendary, talented or as handsome as those two, but we’ve eaten at some of the same restaurants as them.” 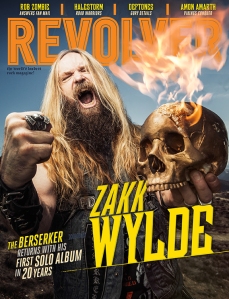 Along with the debut of his new video Wylde is also on the cover of the new issues of Revolver magazine and Guitar World magazine.  He appears alongside fellow guitar legend Buddy Guy in the new issue of Guitar World.  Each can be purchased online via Revolver’s official online store and that of Guitar World.

More information on Book of Shadows II is available online now along with all of Zakk Wylde’s new tour updates, news, and more at: