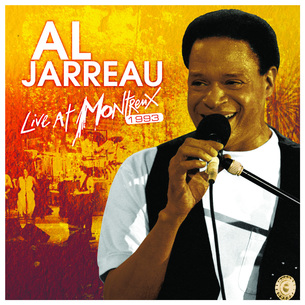 This Friday, April 15th, Eagle Rock Entertainment will release music legend Al Jarreau’s new live recording Live at Montreux 1993. While it was not his first time ever performing at the famed music festival, the upcoming CD release of the performance marks the first time that the concert has been released in any format.  That is just one part of what makes this new CD recording a welcome addition to the music library of any of Jarreau’s fans.  The concert’s set list is just as important to note in the recording’s presentation.  That will be discussed later.  It is a rather interesting element to note, too.  Last but hardly least important to note of the recording is Jarreau’s stage presence and that of his fellow musicians.  Even with the performance being presented only on CD (so far) the group’s stage presence translates relatively well.  That translation, when set alongside the concert’s set list and its presentation, rounds out the recording’s presentation.  It joins with them to make Al Jarreau: Live at Montreux 1993 a welcome first offering for this concert.  One can only hope, of course, that from its success a DVD and/or Blu-ray presentation of the concert will follow sooner rather than later.  Regardless of whether or not that happens, it can still be said of this single-disc presentation that it is, again, a welcome addition to any Al Jarreau fan’s music library.

Al Jarreau’s new live recording Live at Montreux 1993 is a welcome addition to any of his fans’ personal music libraries.  The main reason for this is that while the concert contained herein was hardly his first-ever performance at the famed music festival, it is the first time that this particular concert has been presented on any platform (E.g. DVD, Blu-ray, vinyl, etc.)  That means it’s the first time that this particular performance has been available for audiences to enjoy for themselves.  It is interesting that the concert wasn’t also released on any visual or other audio platforms.  That is because that it is not the usual course of action for Eagle Rock Entertainment.  Generally Eagle Rock releases its live recordings across every possible platform unless said recordings have already been released on other platforms.  This recording isn’t one of those cases, though.  Again it is the first time that the recording has been released on any medium.  Nonetheless, having it released on only one platform in its initial release is actually a good thing in its own right.  That is because in doing so none of Jarreau’s fans will feel left out in any sense of the word. Everybody will be on the same playing field so to speak.  To that extent having it released on just the one platform—at least for now—is in fact quite important to its presentation even as minor as it might seem to some.  It’s not the only important element of the recording’s presentation, either.  The set list featured in this recording is just as important as the concert’s overall presentation on CD.

The presentation of Al Jarreau’s 1993 performance at the Montreux Jazz Festival solely on CD is in itself a hugely important part of the recording’s presentation.  On the surface it might not seem all that important.  But the reality of the situation is that it is in fact more important than most audiences will realize.  It’s just one of the recording’s most important elements.  The songs that made up the show’s set list are just as important to it as its general presentation.  The reason for this is that the songs in question largely came from one specific album, Tenderness.  The album in question was originally released on December 6th, 1994.  That was roughly a year and a half after this performance.  Even his 1992 album Heaven and Earth, which was released much closer to this performance, isn’t represented here.  Keeping this in mind one can’t help but wonder why exactly it took so long for Tenderness to be released following this performance.  Regardless the concert’s eleven song set is a near full representation of Tenderness.  Keeping that in mind the wait might have been rather long.  But at least for those in attendance experiencing the songs was like just like hearing Tenderness well ahead of its release.  And even for audiences today the same applies.  It is virtually the same as having Tenderness in their libraries just in live form.  This makes the concert’s set list all the more important in this recording.  Even with the concert’s CD presentation in mind both that and the show’s set list are not the only important elements to consider in examining this recording.  Jarreau’s stage presence and that of his fellow musicians is just as important to note.

Both the CD presentation of All Jarreau’s 1993 Montreux performance and the concert’s set list are important in their own right to the overall presentation of this recording.  They are hardly the recording’s only important elements.  Jarreau’s stage presence throughout, and that of his fellow musicians is just as important to note as the aforementioned elements.  Listening through the concert Jarreau and company come across as being entirely organic in their performance.  That is especially evident as the group makes its way through its rendition of ‘Summmertime.’  For those that might not be familiar with the tune, the original composition, penned by George and Ira Gershwin, boasted a much slower, bluesy vibe.  This take on the classic tune however, is the polar opposite of that work.  It is upbeat and free-flowing.  One could go so far here as to say it felt entirely natural and organic in its presentation.  In the same vein, ‘She’s Leaving Home’ shows in its own way the power of the group’s stage presence.  The song’s title is self-explanatory.  Yet even with the song’s title its energy in its performance here is not what one would expect.  Rather it’s one of those performances that even in such a massive venue, still manages to conjure thoughts of a smoky, dimly lit jazz club.  Jarreau and company are so laid back throughout the song that one wouldn’t even begin to think of the song as a piece about a woman leaving a man.  That shows the power of the group’s performance just as well as its take on ‘Summertime.’  On a completely different note (no pun intended) the power in the band’s performance of ‘Alonzo’ is yet another example of the importance of the band’s stage presence in this concert.  Unlike many of the set’s other featured songs it boasts more of the group’s R&B side than its jazz side.  It does so quite well, too.  The natural progression of the song’s energy over the course of its nearly six minute run time is itself an important part of the song.  The manner in which the group progressed through those changes is just as important.  That is because it once again shows the importance of the group’s stage presence here.  The group’s performance never once feels forced as it gradually builds the song’s energy in its opening minutes and then calms it just as gradually over the course of the song’s final moments.  Again, it all feels entirely organic.  Because it feels so natural it is just as apt to keep audiences engaged as any of the recording’s other offerings.  All things considered the group’s stage presence throughout the course of the concert’s seventy-one minutes proves in the end to be just as important to the concert as its set list and its general presentation on CD.  When it is set against those elements, all three elements combine to show once and for all why Live at Montreux 1993 is a welcome addition to any Al Jarreau fan’s personal music library.

Al Jarreau’s new live recording Live at Montreux 1993 is a welcome addition to the personal music library of any of Jarreau’s fans.  That is thanks in part to its singular presentation.  Whereas so many of Eagle Rock’s live recordings are released on multiple outlets, this fist time release of Jarreau’s ’93 Montreux show has been released only on CD.  Being available exclusively on CD means that none of Jarreau’s fans will feel left out if they purchase or order the recording.  The concert’s set list is just as important to the concert’s presentation.  That is because of the closeness of the concert (or lack thereof) to the release of his 1994 album Tenderness.  The set list presented in this concert almost entirely represents that album.  And being that the album wasn’t officially released until roughly a year and a half after this concert it makes the set list all the more important.  For those that don’t already own Tenderness even today it is just as important because that set list more than fills said void.  The group’s stage presence throughout the course of the concert’s hour-plus run time plays its own important part in the concert’s recording.  That is because of just how organic the group’s performance felt from beginning to end.  That organic vibe makes the show’s songs all the more enjoyable for audiences and in turn assures even more listeners’ maintained engagement.  Each element is important in its own right to this recording.  One could even note the recording’s companion booklet which is its own bonus as an important element. All things considered Live at Montreux 1993 shows in the ed to be a recording that any of Al Jarreau’s fans will want to add to their personal music libraries.  It will be available in stores and online this Friday, April 15th.  More on this and other titles from Eagle Rock Entertainment is available online now at: