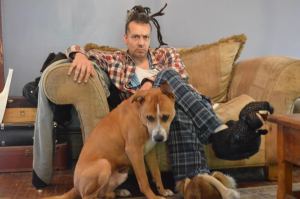 Demos For Sale, the new album from Chuck Mosley (And The VUA) will be released on CD on Friday, July 8th and on limited edition vinyl LP formats on Friday, July 22nd.  The album will be released by EMP Label Group/eOne in North America and via EMP/SPV in Europe.  Its release comes through a partnership between the labels and THC : Music.  It can be pre-ordered online now here.

Demos For Sale is a compilation of demos and early mixes from the band’s 2009 album Will Rap Over Hard Rock For Food.  Mosley discussed the albums’ comparison in a recent interview.  He shared his thoughts that the final product apparently was not what he had originally hoped for, thus leading to the upcoming release of Demos For Sale.  “While it was a great record for what it was, and a lot of people love it, Will Rap Over Hard Rock turned into a monster that I let get completely out of control with overdubs, over-production, my live tracks getting redone by God knows who..,” he said.  “Demos for Sale, is a choice version of the LP, before it mutated into Will Rap Over Hard Rock for Food, a little closer to how we wanted it to be – live, dirty and punk rock.. warts and all.”

Mosley will tour in support of his new record beginning next Thursday, May 19th in Eau Claire, Wisconsin.  The tour currently runs through July 22nd in Northampton, MA.  Rob Roy–of Dead By Wednesday–and Opus will serve as support acts for the tour.  Mosley’s current tour schedule is noted below.

*= with special guests Opus and Rob Roy of Dead By Wednesday

More information on Demos For Sale is available online now along with all of Mosley’s latest news and more at: