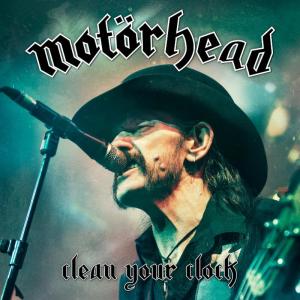 Earlier this year the rock community and the music community lost a legend when Lemmy Kilmister passed away.  His passing was a surprise to most.  Though, he had battled ongoing health issues in the last year or so of his life.  This understanding helped to reduce the shock of the Motorhead front man’s passing.  Now as a tribute of sorts to both Kilmister and to Motorhead UDR Music has announced that it will release a new live Motorhead recording next month.

Audiences can also check out the new live video for ‘Bomber’ here.

Clean Your Clock will be available on a number of platforms including: standalone CD, Vinyl, CD/DVD combo pack, Blu-ray/CD combo pack, and Digital Download.  It will also be available in two exclusive limited edition box sets.  The first, a Limited Edition zinc allow Motorhead Forever edition, can be pre-ordered here.  The second, a Limited Edition Silver/Gold Pin edition will be available exclusively via UDR here.  The recording’s track listing is noted below.

More information on Clean Your Clock is available online now along with all of the latest Morothead news at: